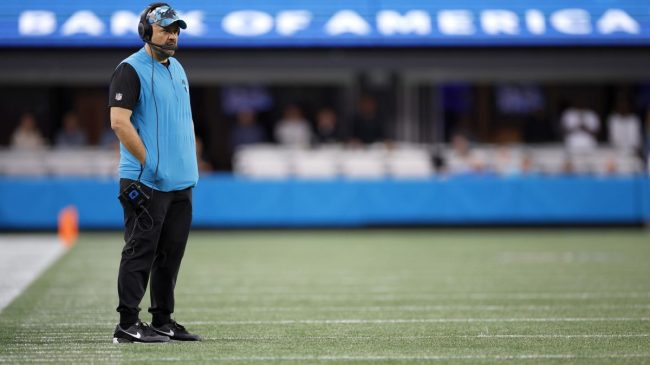 The long national nightmare for Carolina Panthers’ fans is finally over.

The team announced on Twitter Monday morning that it has fired head coach Matt Rhule after a 37-15 loss to the San Francisco 49ers on Sunday that dropped Carolina’s record to 1-4 on the season.

Rhule ends his tenure in Carolina with an 11-27 record and a .289 winning percentage.

The 2022 season always figured to be “make or break” for Rhule with the Panthers. The organization acquired quarterback Baker Mayfield in a trade with the Cleveland Browns over the offseason. But Mayfield has had little success. He’s thrown for just 964 yards, four touchdowns and four interceptions through five starts.

That led Rhule to put the QB on notice just a week ago, but now he won’t be around to make that decision. Rhule himself has come under a lot of scrutiny this season. Much of which came from the media, including ESPN’s Dan Orlovsky. Orlovsky called out Rhule and offensive coordinator Ben McAdoo for an apparent tell in the Panthers’ offensive formations. But Rhule disputed that fact and clapped back at Orlovsky in a recent press conference.

Now it appears Orlovksy, and Panthers fans will have the last laugh. Fans were overjoyed by the news of Rhule’s dismissal on Monday.

Wilks was previously an assistant coach in Carolina from 2012-17 before taking the Arizona Cardinals head coaching job. But Wilks lasted just one year in Arizona after drafting Josh Rosen with the 10th pick in the 2018 NFL Draft.

He then served as the defensive coordinator for the Cleveland Browns and the University of Missouri before returning to Carolina this season.

Wilks has his work cut out for him going forward. But it appears the organization is likely looking outside the building for a hire after the season.