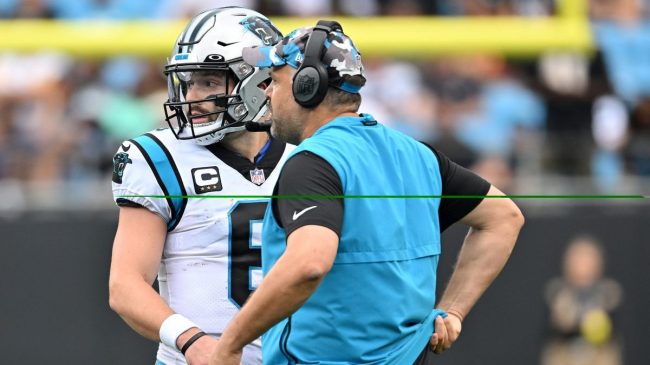 The Carolina Panthers lost again on Sunday. The 26-16 defeat to the Arizona Cardinals dropped Carolina to 1-3 on the year and head coach Matt Rhule is starting to feel the pressure.

Panthers fans have been calling for Rhule’s head all year and now the third-year head coach appears ready to stop taking bullets for his players.

One of those players, in particular, is starting quarterback Baker Mayfield. The Panthers ended a long, drawn-out sage by acquiring Mayfield from the Cleveland Browns for a conditional 2024 NFL Draft pick.

The results have been anything but encouraging for Mayfield and his new team. The former Heisman Trophy winner has completed just 54.7 percent of his passes for 747 yards, four touchdowns and three interceptions through four games. Mayfield was so bad on Sunday that fans couldn’t even determine who was having a worse game between him and Cardinals signal-caller Kyler Murray.

Now it appears Rhule has reached the end of his rope with his starting QB.

Rhule’s stay in Carolina could come to an end soon if he doesn’t sort out his quarterback situation. The former Baylor University coach realizes this and when asked about potential changes, didn’t rule out benching Mayfield for backup Sam Darnold.

“I’m going to refrain from anything big picture until tomorrow,” he said. “At the end of the day, I’m on the headset, I see the things, I know that it’s never just one person here, one person there, it’s a lot of different things, so I’ll try to give you a really well-thought-out answer after watching tapes. All that being said, I believe that we can play better than that. I just feel like we have to expect more from all of us as an offense, and it starts with me first.

“We have to get it corrected, but in terms of any one person I just don’t think it’s right to speak on it right now.”

Darnold started 12 games for Carolina in 2021. But like Mayfield, he struggled mightily. The former New York Jets QB threw for 2,527 yards, nine touchdowns and 13 interceptions.

Not the most encouraging options for Rhule.