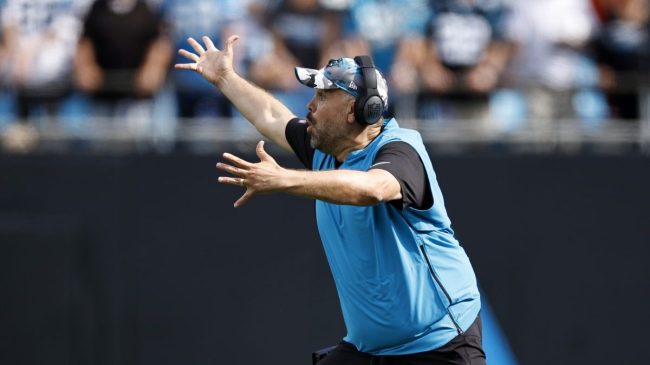 Matt Rhule’s days as an NFL head coach could well be numbered.

The Carolina Panthers’ boss is 10-25 in the NFL since leaving his job with the Baylor Bears. Rhule’s Panthers finished third in the NFC South his first year and fourth his second, and things don’t appear to be better.

To his credit, Carolina’s quarterback situation has been a disaster in each of his years at the helm. But he’s opted not to address the situation with high draft picks. Instead, the team took Ole Miss product Matt Corrall in the third round of this year’s draft. Corrall now looks set to miss the entire 2022 season after suffering a Lisfranc injury.

Rhule and Panthers also made a splash by acquiring polarizing QB Baker Mayfield from the Cleveland Browns prior to the season. Though that move hasn’t worked out as planned to this point.

Now, it appears that Mayfield’s failures may be as much on him as they are on Rhule and offensive coordinator Ben McAdoo.

The Panthers have one of the worst offenses in the entire NFL through two games. Their 268 yards per game rank 28th out of 32 teams, though their 20.0 points per game are solidly mid-pack.

Mayfield, so far, is just 30-of-56 for 380 yards, two touchdowns and one interception. But it may not be all his fault. ESPN’s Dan Orlovsky went on NFL Live on Thursday and revealed that the Panthers are very obviously giving away the coming play by the way they line up.

Yes every @panthers fan should be ticked off

Orlovsky shows a number of plays on tape. Each one shows that running back Christian McCaffrey lines up one yard behind Mayfield in the shotgun when the play is a designed run or a run-pass option. But on designed pass plays, McCaffrey lines up level with Mayfield.

This allows defenses to determine the type of play well before the ball is actually snapped. Fans couldn’t believe such an obvious tell could happen at the NFL level.

I can’t believe this wasn’t caught by anyone in the organization lol https://t.co/h0rqAMCxhO

And Panthers fans believe it should spell the end of Rhule in Carolina.

I think Matt is trying to get himself fired at this point https://t.co/VeMDAcwQs8

Not a great look!