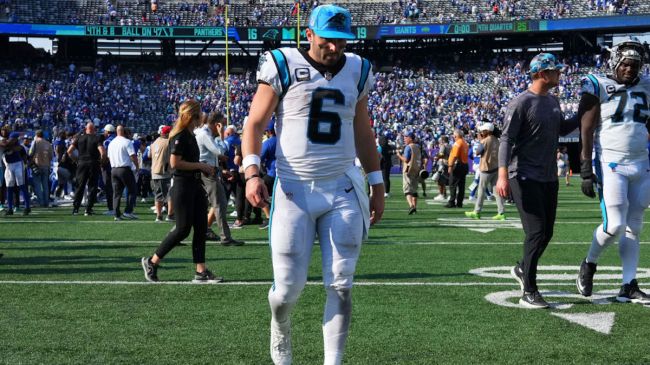 Despite finding a new home in Carolina, it seems to be much of the same old story for Baker Mayfield, who has struggled in his first two starts for the Panthers, who currently find themselves at 0-2 after losses to the Cleveland Browns and New York Giants.

Following the Panthers’ Week 2 defeat at the hands of the Giants, which saw Mayfield’s Panthers put up just 16 points, the former #1 overall NFL Draft pick and Heisman Trophy winner found himself at the butt of many NFL fans’ jokes

One fan argued that new Browns starter Jacoby Brissett (who is a backup to Deshaun Watson) is actually better than Mayfield:

Respectfully, anyone who said Baker Mayfield is better than Jacoby Brissett should apologize and then delete their account.

Another football fan reminded the NFL world of the old narrative that used to surround Mayfield and his old teammate Baker Mayfield:

Baker Mayfield has 132 yards on 25 attempts.. wild that Odell is still holding him back.

“I cannot believe the Giants took Daniel Jones.” “It blows my mind. Some people overthink it. That’s where people go wrong. They forget you’ve gotta win.”

Baker Mayfield has been terrible through 2 games….

A reporter from New York’s SNY is convinced that Mayfield is simply not a good quarterback:

Win or lose, I am very confident in saying that Baker Mayfield is not good.

It certainly doesn’t get any easier for Mayfield from here as the Panthers’ next game is against the New Orleans Saints on Sunday, September 25 at 1 p.m., who have one of the best defenses in the league.

To be fair to Mayfield, though, it certainly doesn’t sound like Panthers fans convinced are convinced by head coach Matt Rhule, either, who is currently in the midst of a nine-game losing streak.

As for the surprising 2-0 New York Giants, they’ll head down to Texas to take on Cooper Rush and the Dallas Cowboys for Monday Night Football on September 26.

RELATED: The Entire Football World Is Laughing At The Browns’ Bad Deshaun Watson Karma Following Historic Collapse Against The Jets