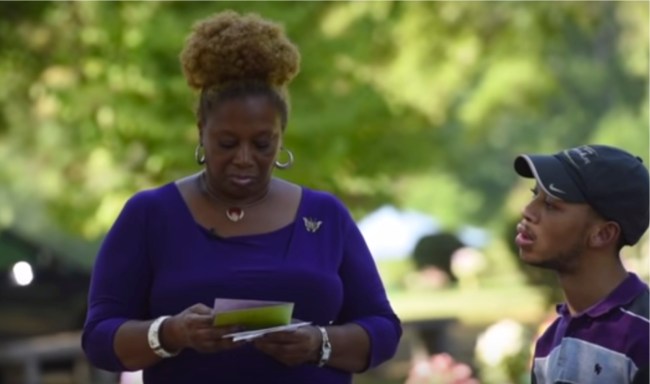 The Carolina Panthers deserve a round of applause from all of us today, because the team and its new owner, David Tepper, pulled a huge bro move by hosting Saundra and Chancellor Lee Adams at today’s game. Who are they? Well, Saundra Adams is the mother of Cherica Adams, the slain girlfriend of former Panthers wideout Rae Carruth, with the former NFL wide receiver being connected with orchestrating Cherica’s murder back in 1999. Chancellor Lee is the disabled son of Carruth’s, who was left without a mother following the plot being followed through with 19 years ago.

With Rae Carruth, who was released from prison this past Monday after serving nearly 19 years for his role in the crimes, a free man again, the Charlotte Observer showed how Saundra Adams was “weary” about him being part of society again. Here’s a recent video posted to the publication’s YouTube channel.

For at least one afternoon, though, the Adamses felt part of the Panthers family, receiving tons of love from the organization and current players during the pregame warmups. That’s according to the Charlotte Observer‘s Scott Fowler, who tweeted out some of the scenes from earlier today.

This was cool: Panthers safety Mike Adams just came over to Chancellor Lee and Saundra Adams, took a photo with them and then turned around so they could be sure to see the "Adams" nameplate on back of his jersey. https://t.co/T4p81SCodF

Fowler also described the afternoon in an article for the Charlotte Observer, which talked about a number of interactions the Adamses experienced, both from players and other fans throughout the game.

Among the players who took photos with Chancellor Lee Adams before the game were safety Mike Adams (who made a point of showing them his last name and called the experience “humbling”); safety Eric Reid and center Ryan Kalil (who came by twice, the second time to give a football to Chancellor Lee).

“Chancellor got to take pictures with lots of the players and the owner came over and took a picture with us,” Saundra Adams said. “It was just so exciting. … The owner introduced himself and I just told him, ‘Thank you. Thank you!’”

The team also welcomed Chancellor Lee and Saundra Adams by tweeting out the photo below.

Both Chancellor Lee and Saundra Adams has been to Panthers game before, according to the Charlotte Observer piece, but had never been invited by the team as official guests, where they were allowed to be on the field together before the game.

While the Panthers may have wanted to separate themselves from their former first-round pick, Rae Carruth, following the disturbing murder of Cherica Adams, they more than made up for it today by hosting Chancellor Lee and Saundra. This is just another reason why sports can be so awesome.