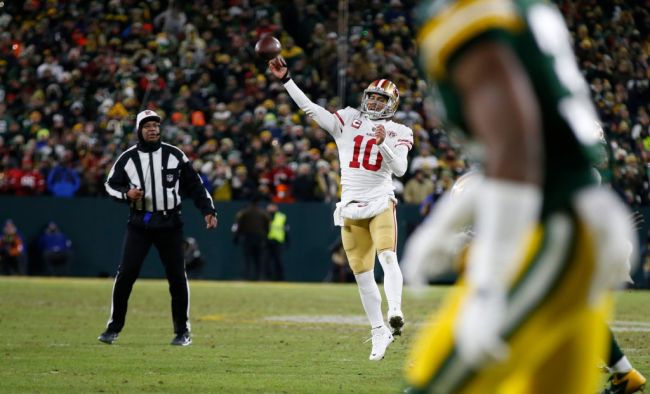 The Carolina Panthers have been on the hunt for a quarterback throughout the offseason. Early on, they attempted to secure trades for Russell Wilson and Deshaun Watson that didn’t pan out.

Now they are expected to either target the position in the draft or go after one of two quarterbacks who have lost their starting jobs on other teams.

According to Sterling Bennett, the Panthers have done their due diligence on Jimmy Garoppolo.

The Carolina Panthers have done their due diligence on #49ers QB Jimmy Garoppolo, per @JFowlerESPN

Today, Albert Breer laid out the exact set of circumstances that could lead to the Panthers going after Garoppolo.

Albert Breer seems to believe that if the Panthers draft an OT at 6, they could look to trade for Jimmy Garoppolo after the first round.

He thinks that Baker Mayfield would be redundant to Sam Darnold and the Browns are pushing more for it than the Panthers are.

In this year’s draft class, it makes a lot of sense to target a position other than quarterback early on. The quarterbacks available have a ton of question marks and the Panthers also need help on the offensive line.

There doesn’t seem to be much of a difference between Baker Mayfield and Jimmy Garoppolo in terms of ability on the field, but we know that at least one Panthers receiver doesn’t want his team to trade for Baker.

We’ll just have to wait and see how the draft plays out next week to find out what the Panthers needs still look like. Maybe we’ll still see one more starting quarterback change jersey before training camp start.