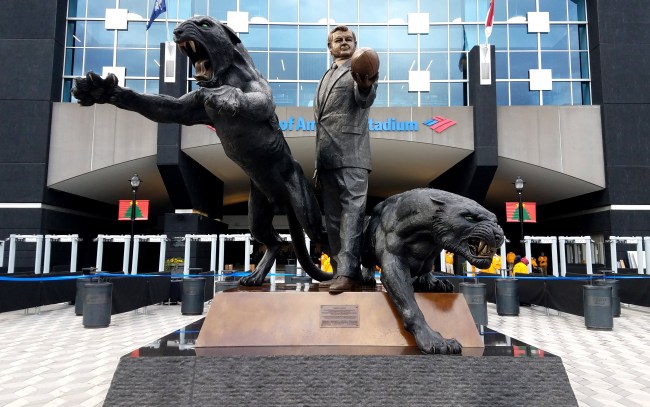 Back in 1993, when the NFL chose Charlotte, North Carolina and the Carolina Panthers as one of two expansion franchises that year, Jerry Richardson became the first ex-NFL player since George Halas to become a team owner.

This past weekend, the Carolina Panthers cut ties with one of their sponsors, CPI Security, after that company’s CEO made racist remarks in an email that became public.

Last Saturday, we said we are committed to doing our part and we mean it.

CPI Security has been a long term partner but, upon reflection, we feel that it is right to end our relationship.

We have informed Mr. Gill of our decision tonight.

On Wednesday, it was revealed that, despite Carolina’s owner David Tepper reportedly being contractually obligated to keep the statue of team founder Richardson on stadium grounds, the Charlotte Department of Transportation has begun closing the road in front of Bank of America Stadium to facilitate the removal of the statue.

BREAKING: The Jerry Richardson statue is coming down. Charlotte DOT is about the close the road near Bank of America Stadium to allow the work to happen pic.twitter.com/WBagBz2i2p

According to the Charlotte Observer…

There has been speculation online that the statue would be an eventual target of the protests against systemic racism that have gripped America for close to two weeks since the death of George Floyd. If the statue was toppled there could have been injuries to protesters or others nearby, and that is part of the Panthers’ reason for removing it now and moving it to an undisclosed location.

“We were aware of the most recent conversation surrounding the Jerry Richardson statue and are concerned that there may be attempts to take it down,” a Panthers spokesman said. “We are moving the statue in the interest of public safety.”

It is unclear where the statue is going, and when or if it will return.

The now 83-year-old Richardson, who sold the team to Tepper in 2018, was reportedly unaware that the statue, a gift from the Panthers’ minority partners to Richardson for his 80th birthday, was being removed.

Richardson was forced to sell the team after a 2017 Sports Illustrated report stated, “…at least four former Panthers employees have received ‘significant’ monetary settlements due to inappropriate workplace comments and conduct by owner Jerry Richardson, including sexually suggestive language and behavior, and on at least one occasion directing a racial slur at an African-American Panthers scout.”

Richardson’s spokesman Jim Gray released a statement on Wednesday which read, “Mr. Richardson has made no public comments about the Panthers or the NFL since the sale of the team and doesn’t plan to do so now as a private citizen. He has worked to treat all people fairly in his business and personal lives and, like many other Americans, is troubled by recent events in Minneapolis, Charlotte, and around the country.”