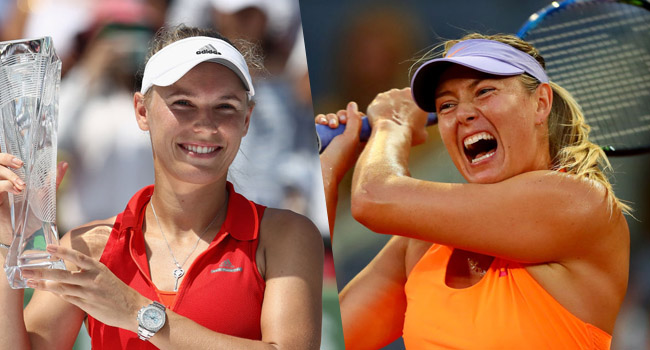 Remember how one of our favorite SI Swimsuit tennis players Genie Bouchard ripped Maria Sharapova and called her a cheater after being suspended for over a year? Then Genie went out and beat Sharapova and gloated about it on social media?

Well, Bouchard isn’t the only one not thrilled to see Sharapova back as both Caroline Wozniacki (our other favorite SI Swimsuit tennis player) and Agnieszka Radwanska also have expressed their displeasure with Sharapova’s return, and preferential treatment.

Speaking to BBC Sport back in March, Wozniacki had this to say about Sharapova getting a wildcard entry into a tournament…

“Obviously rules are twisted and turned in favour of who wants to do what,” Dane Wozniacki, 26, said.

Sharapova, whose main sponsor is Porsche, has won the event three times.

“I think everyone deserves a second chance… but at the same time, I feel like when a player is banned for drugs, I think that someone should start from the bottom and fight their way back,” world number 14 Wozniacki said.

And then Wozniacki dropped this massive dose of shade on Sharapova…

“I think it’s very questionable allowing – no matter who it is – a player that is still banned to play a tournament that week,” she said. “From the tournament side, it’s disrespectful to the other players and the WTA.”

So how do you really feel about it, Caroline? Because it’s kind of hard to tell.

With her return days away, Sharapova's agent Max Eisenbud decided to break his silence after these comments from Radwanska. Here he goes: pic.twitter.com/WXUVxooeK5

Wozniacki has been ranked #1 in the world and won 25 WTA tournaments, so I would hardly call her a “journeymen” player.

Eisenbud later reportedly apologized to Wozniacki privately via email, but she isn’t having it, according to The Sunday Times…

“If he were really sorry, he’d have gone publicly to the media where he called me a journeyman and said that he’d made a mistake. So that apology is useless.”

Awesome. Finally, a reason to get interested in tennis again. I may even have to watch some of the French Open this week.

Oh, and consider me #TeamWozniacki.