Caron Butler Rocking Brand New Hair On NBA Broadcast Freaked Everyone TF Out, Including His Own Kids 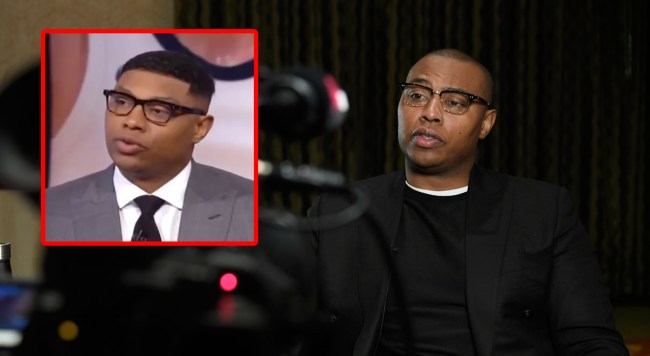 For about as long as most basketball fans can remember, former NBA player and current NBA TV analyst Caron Butler has been pretty much bald.

For reference, here’s Butler with Kobe, Lamar Odom, and Brian Grant way back in 2004 – just two years removed from college.

Note that Butler had LESS hair 11 years later, not more.

So when Butler went on national television on Saturday breaking down the NBA Playoffs with a brand new, thick head of hair that sprouted seemingly out of nowhere, there was no chance in hell that the internet wasn’t going to notice. (Right, Jason Witten and John Cena?)

I’m watching Caron Butler analyze the #NBAPlayoffs & trying to figure out wtf happened to his head 😂😂😂 where this hair come from 🤔😂😂😂 pic.twitter.com/qYFfVrLsDi

Caron Butler: this is my real hair!

Where did Caron Butler get this hair and hairline from??? I’m gonna pass out. pic.twitter.com/DCSvulIkhO

Even worse, it turns out that Caron Butler’s own kids didn’t know WTF was going on with their dad’s new hair, something that Butler had a good laugh about on social media.

Make sure you watch @NBATV Tonight I got my taxes back I might have dreads …😁😎🔥 pic.twitter.com/2WYyXVbIAG

Then on Sunday, Butler’s hair was gone as quickly as it arrived, much to Shaq, Barkley and everyone else’s delight.

My man @realtuffjuice showed up without his hair piece today and @SHAQ is willing to put up the 💰 to bring it back pic.twitter.com/dEwWarc6iG

We hardly knew ye Caron Butler’s fake hair. Much like Carlos Boozer’s spray-on hair, you will be dearly missed.

Carlos Boozer: “I look ridiculous with this spray on hair”