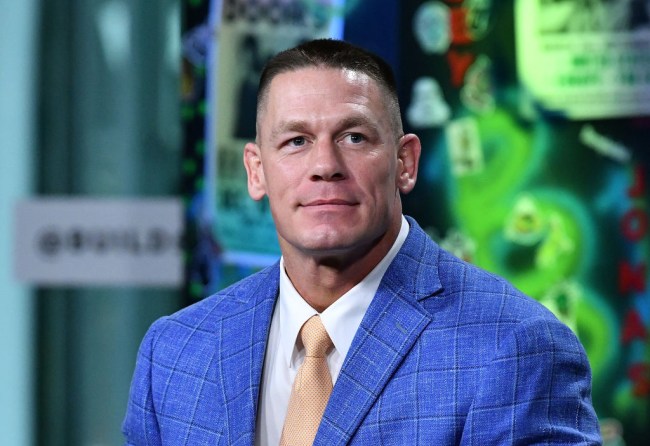 John Cena made his return to the ring at WWE Super Show-Down in Melbourne, Australia where he and Bobby Lashley secured a W over Kevin Owens & Elias. But the 41-year-old’s achievements in the ring were entirely secondary to whatever he had on his head. The 16-time WWE World Champion ditched his signature high-and-tight military cut to rock a haircut that can best be described as the manifestation of a mid-life crisis.

Cena, who claims he now wants to be a dad after his adamant desire not to be was a driving force behind his split with Nikki Bella (although the two were spotted in Australia together), may be rocking the dad cut to prove that he’s a changed man. It’s unclear whether or not John Cena will quit the WWE to sell life insurance and drive an eco-friendly Prius, but if that mop is any indication, Cena’s illustrious wrestling career may be a thing of the past.

I’m sure Cena had good reason to wear a dead ferret on his head, and hopefully we will find out why. But for now, lets bask in the internet’s joy in seeing the wrestler look like he’s two seconds away from yelling at the kids to get off his shed.

John Cena with hair is looking like Johnny Cage 😂 pic.twitter.com/HmSOBI4fYy

Good to see John Cena and his totally not a midlife crisis hair at Wwe super showdown #wwessd pic.twitter.com/thBSHglCJl

"See Nikki, I can change. My hair says it all"

With all the problems I have in my life, John Cena's hair situation is the thing that has me in a deep crisis right now.

Cena’s hair makes him look eerily like… JBL, and it’s distracting me. #WWESSD

I keep looking at John Cena and thinking he has a briefcase under the ring and plans on trying to sell everyone life insurance. #WWESSD

I can't get over John Cena's hair. Put a mustache on him and he looks like Ned Flanders without a shirt on. #WWESSD

John Cena has arrived with a combover and instantly looks deep into his 50's and divorced. #WWESSD pic.twitter.com/uA8XLxcJPn

john cena after reading the tweets about his hair pic.twitter.com/PcQHHBLlJx

John, I support you. But I’m not interested in buying a 1992 Toyota Corolla with power windows, so stop selling me on it.