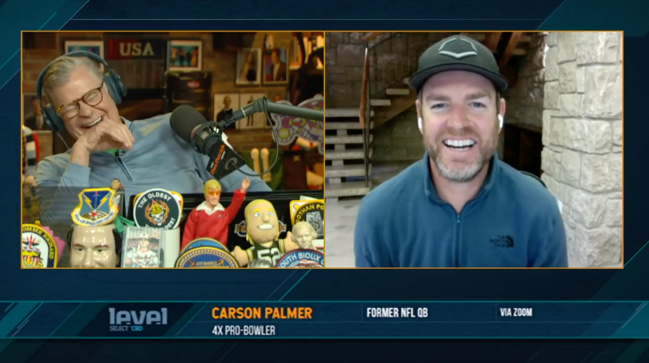 During an appearance on the Dan Patrick Show, former Southern California quarterback Carson Palmer accidentally let a new piece of information slip about his alma mater. After realizing his mistake, Palmer’s reaction was priceless.

The Trojans are currently searching for the next head coach of their football team. After firing Clay Helton after a Week 2 loss to Stanford, they are being led by interim head coach Donte Williams.

Williams is not expected to be in the mix for the full-time job and athletic director Mike Bohn is set to make a big-splash hire. Outside of a Rose Bowl win in 2018, USC has not reached a New Year’s Six bowl game since 2008.

The program is in (relative) disarray and has been fairly irrelevant since Pete Carroll’s departure to the Seattle Seahawks. As a historic powerhouse in one of the world’s biggest media markets, the spotlight is huge and the expectations are high.

Thus, Bohn’s decision includes the biggest names in the country.

Among the coaches considered to be at the top of the search are Penn State’s James Franklin, Iowa State’s Matt Campbell and Cincinnati’s Luke Fickell. Palmer, who joined Patrick on Monday morning, confirmed those names.

He said that he has been “talking to a bunch of folks and giving input here and there” and “as involved as they will let him be.”

In terms of the front-runner, Palmer was hesitant to give a single name. He said that there are a lot of front-runners, listed the names that have already been circulating, and then went on to discuss the possibility of Steelers head coach Mike Tomlin.

Patrick then asked if Tomlin has hypothetically been discussed. Palmer’s face went blank for a moment, seemingly realizing that he might have said something that was not well known, and backtracked as best he could.

“I’m sure he has,” he said. “I think anybody is a potential candidate right now. And that’s what’s so great about the job, it can lure an NFL guy that is tired of his current situation.”

Palmer went on to explain how Tomlin might be of interest and talked about why the job is so intriguing. What he did not know, which Patrick made point to emphasis, is that Tomlin’s name has been floated around by someone with such strong connections to the program.

Palmer’s reaction to realizing what he said was priceless.

Carson Palmer has been included in conversations surrounding #USC next Head Football Coach and he says #Steelers HC Mike Tomlin is a name that could be in the mix. pic.twitter.com/GJpar0cZUy

Now, Palmer’s slip doesn’t really mean much. He is not suggesting that Tomlin has a mutual interest in USC or that he has even been approached by Bohn and his search team.

Palmer is just saying that Tomlin is on the list, which at this point, is as long as it will get. Even still, his reaction on the Dan Patrick Show was hilarious.