Colts Might Be Regretting Their Decision After Seeing Carson Wentz Go Off While Matt Ryan Struggles Vs. Texans 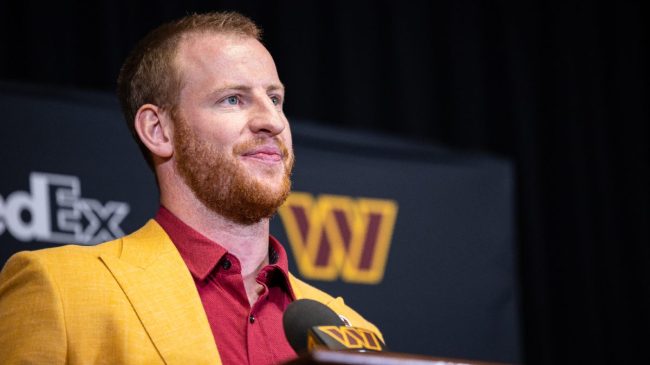 Carson Wentz was dealt from the Colts to the Commanders this offseason after just one season with the team. His exit from Indianapolis was made much more dramatic after the front office began calling out their former passer.

Reports began to surface regarding Wentz’s leadership skills and attitude upon being traded to Washington, by it’s now the Colts who could be regretting their decision.

Wentz is off to a great start in the nation’s capital, throwing for 171 yards in the first half against the Jaguars. The quarterback is 16/22 with a pair of scores, getting his team off to a 14-3 advantage at the halftime intermission.

Indianapolis, meanwhile, is losing 10-3 to the Houston Texans, who many expect to be among the worst teams in the NFL. New passer Matt Ryan was 14 of 19 in the first half with a pick that set up Houston’s only touchdown drive.

Fans and media are reacting to the opening performances of each passer.

Of course, there have already been some overreactions to seeing the starting performances from both Ryan and Wentz. Take a look at what people are saying on Twitter.

PlayerProfiler NFL posted a video of Matt Ryan’s first half interception, saying, “Matt Ryan with his best Carson Wentz impression. Something about that Colts #2 jersey…”

Ryan will hope his play improves over the second half of action. Right now, they could be wishing Wentz was back under center.