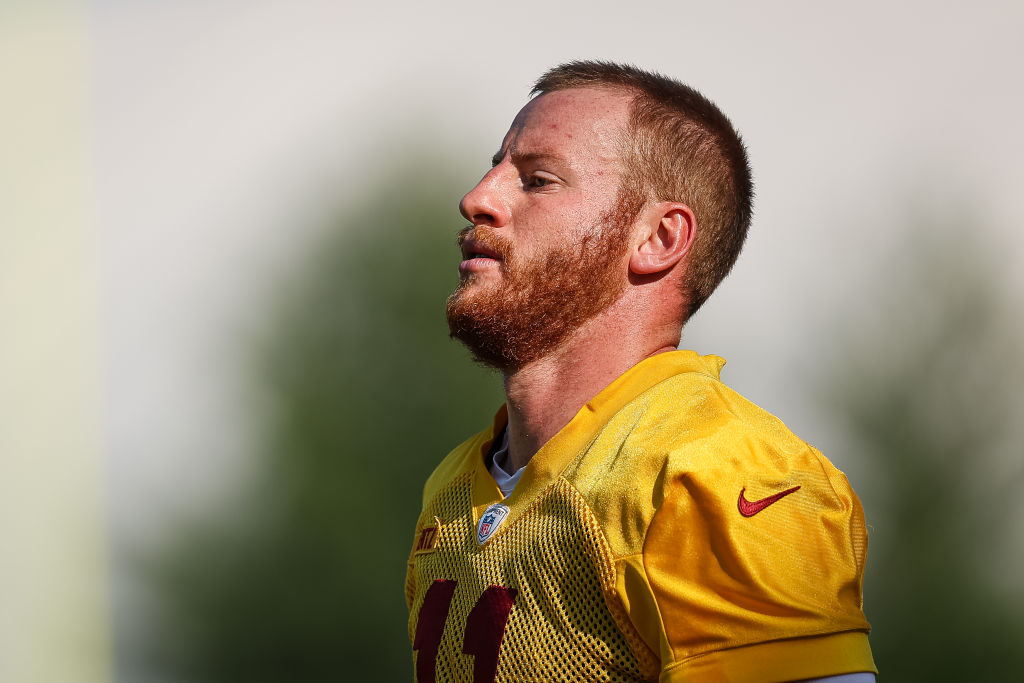 Carson Wentz has been reportedly having a rough training camp with the Commanders, and one reporter had no issues confronting him about it.

Throughout Comman,ders’ camp there have been reports that Wentz has struggled with the offense and has been inaccurate at times.

Wentz’s accuracy has been an issue in recent seasons as he has bounced from Philadelphia to Indianapolis, and his acclimation to Washington’s scheme is seemingly still a work in progress. Although the team held a normal practice — not a full scrimmage — the team periods and individual work with receivers reflected his struggles.

During a recent interview with 7 News DC, reporter Scott Abraham straight up grilled Wentz about reports of struggles in camp.

Me – "Carson, there's a growing narrative that you've been inaccurate in training camp. Is that a fair characterization?@cj_wentz – "For one, it's camp. I didn't know that, so thank you."

Watch the entire back and forth. Good stuff from the @Commanders QB1.

Abraham also bluntly asked if Wentz thinks his stop with the Commanders is his last chance to prove that he’s a starting QB in the league.

Indy didn't want him after one season.

I asked @cj_wentz if he believes that this opportunity with the @Commanders is his last chance to prove that he can be a starting quarterback in the NFL.

Fans had mixed reactions to Abraham’s interview with Wentz.

Thankfully, Carson demonstrated grace & class in response to this pompous, unprofessional mess. I recognize you have made a living on childlike provocation but it needs to be called out. Don’t expect special access and good luck building rapport with the guys @Scott7news . https://t.co/fegxgvcJmr

Dave Spadaro's out here asking players their favorite ice cream flavor and this guy is one step away from asking Wentz if he's thought about his own death. https://t.co/vx7nik2FRj

I wish folks understood that they undermine media in general when they pull this mess. https://t.co/AzS9sYXdIl

What a garbage interview. Respect the hell out of Wentz for how he handled this. https://t.co/4oaqJ4ntof

People calling this reporter unprofessional…It just wasn’t a softball interview. Buddy held Carson feet to the fire. You tell me where the lie was in this one??? I’ll wait…. https://t.co/JbaNdb1a08

There is absolutely nothing wrong with this interview. The fact that so many people think otherwise is very telling. Everybody wants access journalism and expect these guys to have to be “rooting for all of them.“ Not their job to be fans. https://t.co/xyIVUc6mxD