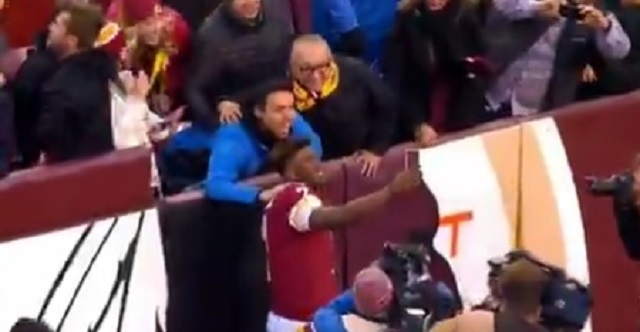 Dwayne Haskins got his first win as an NFL starter on Sunday but he’s still making rookie mistakes.

Before today’s Redskins-Lions game was over, backup QB Case Keenum was in the lineup taking the victory formation over Haskins. Apparently, Haskins was busy taking selfies with fans and forgot that the game hadn’t ended yet.

Dwayne Haskins takes a selfie with fans while Case Keenum has to do the victory formation pic.twitter.com/Y76AL2cquF

Redskins interim coach Bill Calahan told the media Keenum had to take the victory formation because they couldn’t find Haskins.

Redskins coaches could not find Haskins for the final victory formation. Had to bring in Keenum. pic.twitter.com/s1tiF7cmwA

Interim coach Bill Callahan said Case Keenum took the final snap because they couldn't find Dwayne Haskins. He was by the stands taking a selfie with a fan in celebration. "I think he thought the game was over," Callahan said. "I'm happy we won. We'll… https://t.co/D7XkeALiiy

Update: Haskins admits he thought the game was over when he was taking selfies with fans.

Dwayne Haskins explains he thought the game was over when he missed the final snap. “I was so hype”