Never Forget When Case Keenum Threw Nine (!!) TDs In 35 Minutes (!!) Of One Game At Houston 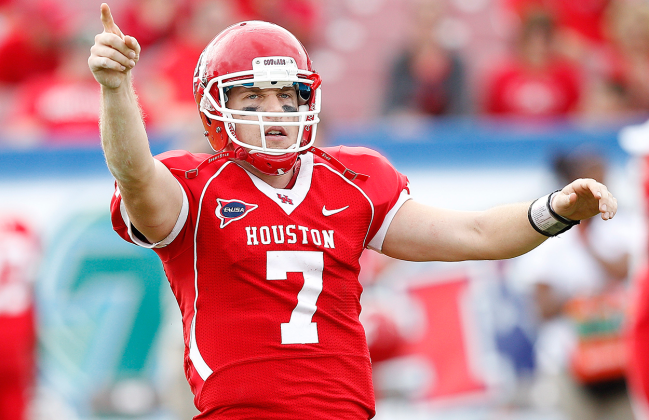 NFL journeyman Case Keenum was traded to the Buffalo Bills during the offseason, marking his ninth team in 10 years. Prior to entering the league in 2012 as an undrafted free agent, he was one of the best college football quarterbacks of all-time. People forget.

Keenum, a two-star recruit out of Wylie High School in Abilene, Texas, won a Texas Class 3A Division I Championship. He also threw for 6,783 yards and 48 touchdowns and rushed for 41 touchdowns and 2,000 yards over the course of his career with the Bulldogs.

Despite his success in high school, Keenum was only recruited by Houston, Baylor, North Texas, and UTEP. But the Cougars were the only school to offer a scholarship so he ended up in H-Town as a freshman in 2006.

After sitting behind Kevin Kolb (what a throwback) as a freshman, Keenum went on to start in 2007. A year later, in 2008, he led the nation in total offense and was the national runner-up in passing yards behind only Graham Harrell. During the 2009 season, Keenum recorded 48 total touchdowns and over 5,800 total yards en route to a 10-4 record.

That year really put him on the radar, but an injury ended his 2010 season — and potentially his college career — early. However, because he missed the majority of the year, the NCAA granted him a sixth year of eligibility.

Case Keenum’s 2011 season at Houston is one of the greatest of all-time.

During the season, he set the all-time NCAA Division-I passing touchdowns record while playing Rice. In that game, he threw for nine (!!) touchdowns in less than 35 minutes, in less than 10 minutes on the field.

Houston initially went down 17-7 with 14 seconds left in the first quarter. And then it was Keenum time.

The 6-foot-1, 215-pound quarterback threw his first touchdown of the day as the clock expired in the first quarter. And then he added three more in the second quarter, four in the third, and one in the fourth.

It was a truly insane performance.

By the time that Keenum graduated, and as of the end of the 2020 regular season, he still holds the following NCAA records:

And yet, somehow, Keenum went undrafted. 10 years later, he got the last laugh.