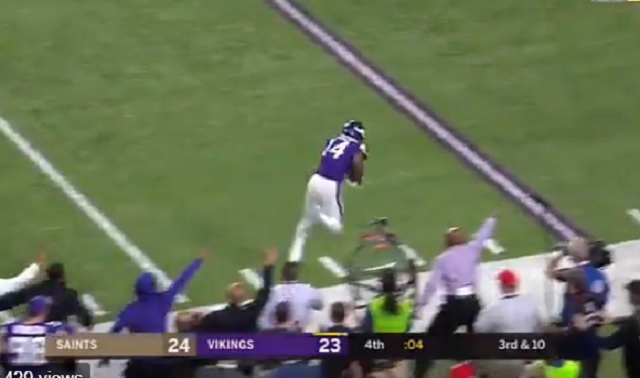 With only 10 seconds left in the game and down one point the Vikings scored a miraculous game-winning touchdown against the Saints.

Watch as Vikings QB Case Keenum threw up a prayer and the Stefon Diggs was somehow able to catch the ball, stay in bounds and take the ball to the house for the TD.

I have no idea what Marcus Williams was doing but he may never be able to live this play down.

After the game-winning TD Vikings QB Case Keenum was at a loss for words.

Stefon Diggs was also in shock when he spoke to Josina Anderson after the game.

All I can say is, give it to God. Because without him, nothing is possible and I wouldn’t be here so — damn that shit feel good!”

Pretty awesome to see this Vikings team moving forward and possibly getting a chance to play in the Super Bowl if they beat the Eagles next week.