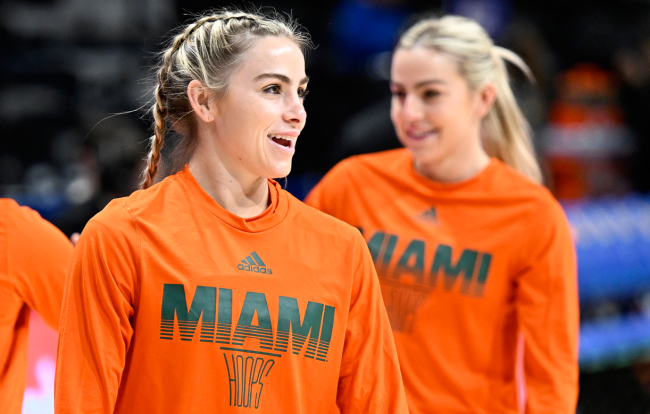 Currently ranked fourth and fifth on the Women’s NIL 100, the Cavinder twins, Haley and Hanna, are no strangers to going viral on social media.

The Cavinder twins, who play basketball for the University of Miami after transferring from Fresno State this past offseason, trail only Olivia Dunne of LSU, Suni Lee of Auburn, and Paige Bueckers of Connecticut on the financial list.

That’s due to the combined 9.2 million followers the twins share on social media, most of it coming from TikTok.

It is there that Haley and Hanna recently celebrated their mom Katie Cavinder’s birthday.

“Happy bday to our triple mama cav,” the twins captioned the video of themselves dancing in bikinis around their mom while she stands there looking like a deer caught in headlights.

“When it’s your mom’s birthday but you don’t fear age because she looks like this,” the sisters superimposed over the video.

“She just stands there and glows,” one fan commented, to which the twins replied, “I know.”

Over on Instagram it was more of the same as Haley and Hanna Cavinder paid tribute to their “best friend & triplet” with a picture and video dump.

“You’re the most selfless, hardworking & supportive person,” the ladies wrote in the caption. “Thank you for challenging us each day & making us better. We love you more than you’ll ever know. Our biggest motivation.”

“So now we kno where u gals get ur good looks from!! Thanks Mom!!” a fan commented.

“Happy birthday but how old is she because she looks young?” another follower asked.

Earlier this week, one of the twins (don’t ask us which) did the same “first kiss” themed video that popular LSU gymnast Olivia Dunne also shared this week.

“Any guesses?” she asked in the caption.

The letter “T” appeared after her “kiss” which led to every guy following her whose name begins with T thinking/hoping it is him.

Whoever it is, hopefully they have better luck than the girls did on New Year’s Eve.

Also, just like Olivia Dunne did, but before she could do it, the Cavinder twins enlisted their sisters to make a Zoolander themed TikTok video.

At least they were born (barely), unlike Dunne, when the movie came out.