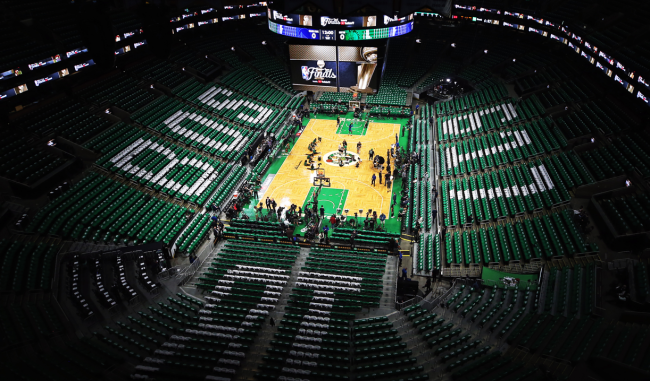 For you see, back in March, Bienvenue, who just graduated from Cape Cod Technical High School, got a Boston Celtics 2022 World Champions banner tattooed on his left bicep.

It was an odd decision considering the Celtics were only in fourth place in the Eastern Conference at the time – certainly not a lock to win the championship, let alone make it all the way to the NBA Finals.

So… now that the Celtics didn’t win the NBA Championship this year what is he going to do about the tattoo?

Why would he keep the Celtics championship tattoo after the team lost? Because of all the good it has brought him and those close to him.

His mom Nancy said that because of her son’s tattoo, she is “more into basketball now than I’ve ever been.”

She added, ““I wouldn’t want him to cover it. Some people say, ‘Will he cover it?’ I’m like, ‘I don’t think so.’ I wouldn’t because it would just be a great memory. He’s met some nice people, we were caught dancing on the jumbotron and that was pretty cool to me.”

His friend Charlie Perkins said he and all of Bienvenue’s friends very excited after he got the Celtics ink.

“Whenever you’re watching a Celtics game with Jack, it don’t matter if they’re winning or losing, you’re gonna have a good time,” Perkins told The Athletic. “Jack really got me into basketball. I wasn’t too big (into it) and was a Bruins fan, but he brought me to a game after (he got the tattoo) and I just really started liking the guys on the team.”

Bienvenue said that, yes, he did get made fun of by people who didn’t know him, but those that matter have been “very supportive.”

“And i know everyone is wondering about the tattoo, im honestly not thinking much about it right now, and it’s not a huge deal to me,” Bienvenue said in an Instagram Story after the Celtics’ Game 6 loss. “This year has givin me some of the worst and some of the best moments of my life, and a lot of those best moments involve the tattoo. So no it will not be removed.”

Plus, who knows? Maybe the Celtics will win it all next year, right? After all, as he puts it, all he would have to do is “get the two lasered off and get a three.”