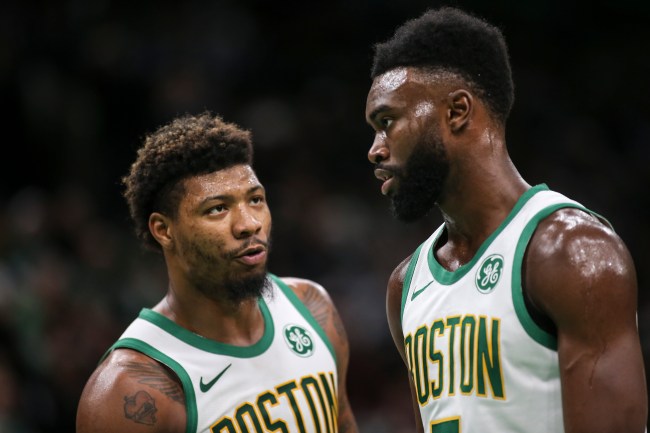 Things got a bit tense between Celtics teammates Marcus Smart and Jaylen Brown after the team’s game 2 loss to the Miami He.

Immediately following the Celtics’ loss on Thursday night, there were reports of players cursing each other out and throwing items in the locker room.

Smart wasn’t the only one yelling. There were definitely items thrown and a lot of yelling. #Celtics

Been outside a bunch of locker rooms in my days. That’s was as raucous as I’ve ever heard. #Celtics

According to The Athletic’s Shams Charania, a frustrated Smart yelled at his teammates after the game and Brown snapped back at him which led to the two getting into a heated confrontation.

Marcus Smart and Jaylen Brown had a heated exchange after Game 2, with teammates diffusing the situation before any possible physical altercation.

Sources told The Athletic that Smart stormed into the Celtics postgame locker room saying that other players needed to be held accountable and not simply point the finger toward him when things are going wrong. As Smart continued and his voice grew louder, sources said Brown snapped back and shouted that Celtics players must stay together and that their actions must come as a team, not individually, and that Smart needed to cool off.

Smart and Brown had a tense interaction inside the locker room, with objects thrown around. Teammates diffused the situation before any physical altercation could take place, sources told The Athletic.

Coach Brad Stevens reportedly held a meeting with both Brown and Smart to squash things after the locker room confrontation took place.

ESPN Sources: Brad Stevens had a late night Thursday meeting with Celtics leaders – Kemba Walker, Jayson Tatum, Jaylen Brown and Marcus Smart – to work through emotions of post-Game 2 locker room. A lot of yelling in locker room, but nothing escalated to a physical confrontation.

Game 3 isn’t until Saturday so the Celtics have a bit of time to regroup and get things settled internally until then.