Chad Johnson Praises A.J. Green After Green Broke His Record For Most 100-Yard Games As A Bengal 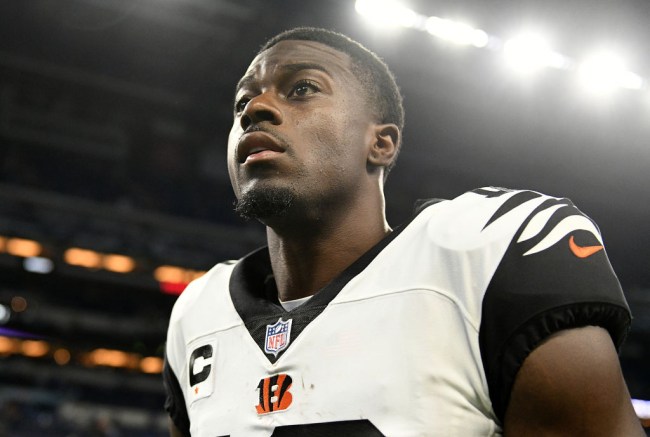 A.J. Green etched himself into the record books in a 27-17 comeback win over the Miami Dolphins Sunday when he recorded the 32nd career game with 100+ receiving yards. The seven-time Pro Bowler surpassed Chad Johnson as the Bengals’ all-time leader in 100+ yard games. Green posted 112 yards receiving in a somewhat quiet game by A.J. Green standards.

After the game, Green gave due credit to his receiving predecessor, saying: “It’s unbelievable, it’s another humbling achievement. Chad was one of the best, and I’m just trying to live up to it.”

Johnson responded with one emoji of the highest praise.

Green may be the most understated superstar in the league. He’s a lunch pale receiver who is quietly making a case for himself to secure a place in Canton, a goal he’s openly talked about. This tidbit about his parents being at Sunday’s record-breaking game but not caring about individual stats is proof that the apple doesn’t fall far from the tree.

AJ Green with his 32nd game with 100 receiving yards or more passing Chad Johnson on the Bengals all-time list as #1.. his parents were at the game, “they have no idea about stats.. they don’t care about that”. Lol

P.S. It’s Monday. It sucks. But just know that you are loved by Chad Johnson.

Good morning, i fucking love all of you, if you’re at work tell your boss i love him/her, use this tweet as reference if necessary ❤️