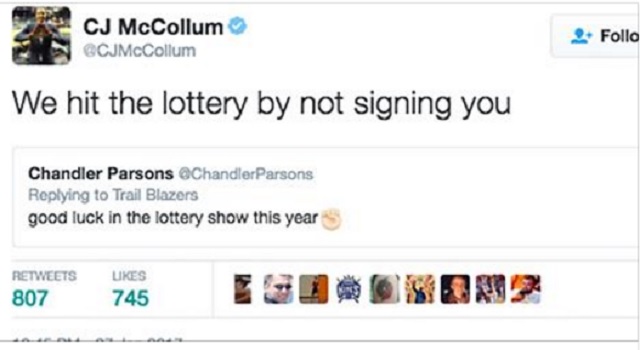 Last night, Chandler Parsons of the Memphis Grizzlies and C.J. McCollum of the Portland Trailblazers got into a hilarious war of words which ended with Parsons taking a pretty big L.

To be fair, the NBA 3-point line is really, really far away from the basket. pic.twitter.com/dHusI9cHcW

@trailblazers good luck in the lottery show this year✊🏻

Only to get put in a body bag by McCollum

We hit the lottery by not signing you https://t.co/eSiBaNT061

After being heavily courted by the Blazers this summer, Parsons signed a four-year, $94.4 million deal with the Grizzlies in July but has appeared in just 20 of Memphis’ 48 games this season because of knee injuries. He is averaging career lows of 6.7 points and 1.9 rebounds per game.but has barely played all season due to injury.