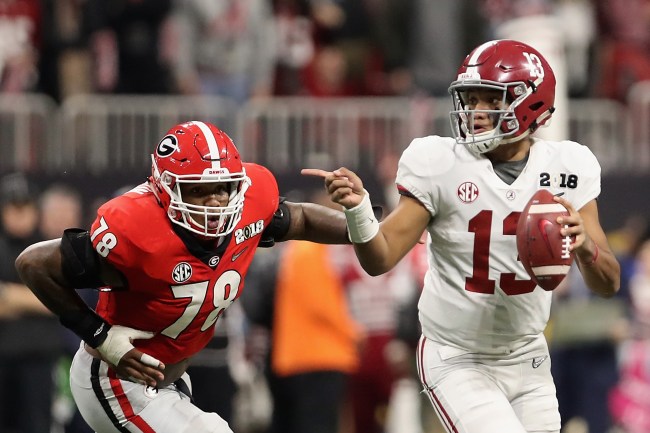 ATLANTA, GA - JANUARY 08: Quarterback Tua Tagovailoa #13 of the Alabama Crimson Tide scrambles with the football ahead of defensive tackle Trenton Thompson #78 of the Georgia Bulldogs during the CFP National Championship presented by AT&T at Mercedes-Benz Stadium on January 8, 2018 in Atlanta, Georgia. The Crimson Tide defeated the Bulldogs 26-23. (Photo by Christian Petersen/Getty Images)

The Big 12 Conference has proposed sweeping changes to N.C.A.A. transfer rules, that would span all sports, teams and conferences within D-1. The proposal gives student-athletes the ability to change schools, should the team’s head coach be fired or leave for another job, with just a single restriction; players will not be able to follow the coach to his new destination. While in all other scenarios (except players on teams facing a post-season ban) transfers would still be required to incur a “year in residence”, they’ll no longer face transfer restrictions (i.e. to teams scheduled to face the program in coming seasons) or require release from their existing program to apply for financial aid at the transfer school. Iowa State A.D. summed up the proposal by saying “for the first time ever in college athletics, the student-athlete is empowered.”

Howie Long-Short: The proposal, which is not the final proposal, raises a variety of concerns that need to be addressed. With 27 schools now generating more than $100 million/year in net revenue, the addition of a few fully-funded scholarships to offset potential transfers seems inconsequential. The real financial concerns appear to be tied to teams that miss the post-season, either because of a ban (APR scores are impacted by transfers) or mass transfers drastically reducing the quality of the roster; as conferences are rewarded based on the success of their members. The N.C.A.A. has asked the D1 Transfer Working Group to issue a proposal for legislation in June; changes would go into effect for either the ’18 or ’19 season.

Fan Marino: The logic behind allowing a player who experienced coaching turnover to immediately transfer without sitting out a season, is to protect student-athletes from the post-season bans tied to coaching indiscretions. With the Penn State football program facing a 4-year bowl ban related to the Jerry Sandusky saga, the N.C.A.A. offered guys on the 2012 team a similar opportunity. It didn’t lead to a mass exodus, but 9 players did leave including star Silas Redd (USC). It must be noted that while some received increased playing time, none achieved overwhelming success at their final collegiate destination.

For the first time since the Standard Media Index (SMI) began tracking in-game NFL advertising revenue, the total dollars declined YOY (-1.2% to $2.42 billion). While the cost of spots rose 1.2% to $505,000, as the demand remains high (particularly in the upfront marketplace); the marginal per spot increase was more than off-set by a rise in “make-goods” as viewership declined 9.7%. The data includes all ads shown on ESPN, CBS, NBC & FOX NFL broadcasts between September 7th and December 31st (the NFL’s 2017 regular season).

Howie Long-Short: The reduced spend by automotive (-5.4% YOY) & consumer electronics companies (-3%) had the greatest impact on the total revenue generated, as those two categories represent the NFL’s biggest spenders. Several categories that generate a smaller percentage of the league’s advertising revenue increased their ’17 spend, including; insurance (+30%), alcoholic beverages (+16%) and fast-food restaurants. For reference purposes, total NFL in-game ad revenue was up 9.6% (to $2.38 billion) in ’15 and 3% ($2.45 billion) in ’16.

Fan Marino: Despite the declining viewership, the NFL remains TV’s biggest draw; 37 of the Top 50 most watched broadcasts of 2017 were NFL games, up from 28 in 2016 (Olympic year) and matching the league’s total from 2015. 9 of the Top 12 were NFL games and Super Bowl LI was the most watched program. 11 other playoff games made the list, as did 6 Sunday Night Football games, the season opener on NBC and 18 CBS and Fox Sunday afternoon windows.

While JohnWallStreet focuses on publicly traded companies, there have been several noteworthy sports-related private-equity deals announced in January; Mars Reel, Sparta Science and Barstool Sports have all raised capital to grow their businesses. Below is a summary of each transaction:

Mars Reel, a sports streaming company that posts video highlights (i.e. dunks) of high school athletes on various social media platforms to draw the eyes of talent scouts, raised a $2.7 million round from a series of investors including LeBron James, Kevin Durant, Shane Battier and the rapper NAS. The company, which also has a player-driven diary series and links to individual player websites, received 148 million unique views in 2017 and is credited with raising the awareness of Spartanburg Day School star Zion Williamson (committed to Duke).

Sparta Science, a sports-tech company that uses data and technology to measure and reduce player injury risk and maximize performance, has raised a $7 million Series A round. The investment, led by Playground Global, will be used to further software innovation and grow its team; efforts that will enable the company to expand beyond the sports world and into the Clinical space. The software, currently used for injury prediction and rehabilitation, is used by various pro & college athletic teams including the Cavs, Falcons, 49ers, Rockies, Nationals, UT, KU, RU and AU.

Barstool Sports, a “controversial” sports and lifestyle digital media company, has raised $15 million at a $100 million valuation. The investment comes from the Chernin Group, who had purchased 51% of the company in January 2016 for $10 million. The company intends on using the capital to double its staff (to 160), expand its amateur-boxing promotion and to create new properties; including a line of branded alcohol and a Barstool themed bar. Barstools also announced it would also begin to sell subscriptions to fans who seek exclusive content.

Howie Long-Short: Sparta Science had raised just a $2.7 million seed round prior to closing on their Series A round, so there aren’t a ton of ways to play the company; but Qualcomm Ventures, the investment arm of Qualcomm, Inc. (QCOM) participated in the seed round. There are no publicly traded corporate backers invested in Mars Reel or Barstool Sports.

Fan Marino: In a recent Recode Media podcast, Bleacher Report CEO Dave Finocchio was asked his thoughts on Barstool. Finocchio answered the question fairly, pointing out their particularly loyal fan base and offering complimentary words for Barstool CEO Erika Nardini. The interview made headlines though, for a quote pointing out the obvious; “they’re not politically correct. They’re definitely more, it feels to me like, white males who want to join a country club. They’re never going to be as big as we are because we work very hard to be inclusive and we don’t offend people.” Naturally the Stoolies disputed the allegations (the comments are fairly entertaining), but the fact remains they’re untouchable from a corporate advertising standpoint. Peter Chernin sits on the boards of American Express, Twitter and Pandora, but those brands won’t advertise with Barstool; their target clientele includes women. Barstool can sell a ton of merchandise, offer subscription fees and draw crowds at events; but, they’ll never draw an audience the size B/R does.