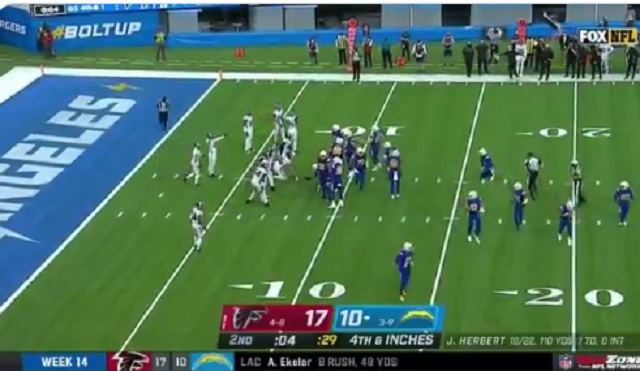 The Chargers continue to struggle on special teams and head coach Anthony Lynn deserves all the blame.

Earlier this week, Lynn took over special teams duties after several mistakes led to big plays last week in the team’s game against the Patriots.

Chargers head coach Anthony Lynn told reporters on Wednesday that he will be taking over the duties of special teams coordinator for the rest of the season. The Chargers gave up a punt return touchdown and had a field goal blocked for a touchdown against New England.

Unfortunately, it doesn’t seem like the special teams unit is performing any better with Lynn at the helm. During Chargers-Falcons game on Sunday, Lynn was unable to set his team up to kick a chip-shot field goal after making some terrible clock management decisions to end the half.

With 20 seconds left in the first half and no timeouts, the Chargers ran the ball on 3rd & 1.

They were stopped short and while some of the offense stayed on the field, the field goal team also ran on. They could not get a field goal off successfully and come up with 0 points.

chargers run the ball on 3rd and 1 (with no timeouts) and try to rush the FG unit out and dont get the kick off before half??????????? pic.twitter.com/L2zRLvVpny

Oh boy, the Chargers don't even get the FG off there at the end of the half.