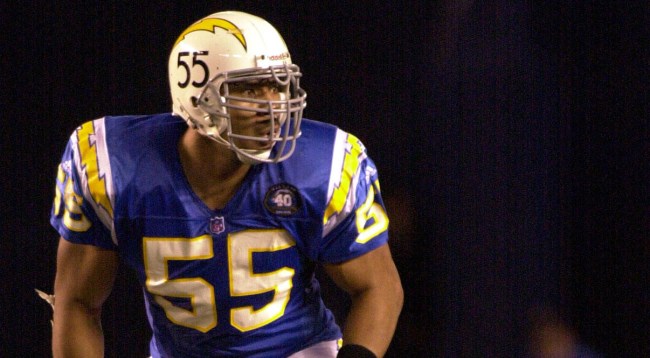 In what I hope, please, please, please, was a coincidence, the San Diego Los Angeles Chargers chose Tuesday to announce they will be going with powder blue uniforms for all of their “home” games in 2019 – the same day that the brutally sad documentary on the life and death of Junior Seau made its network debut on ESPN.

Knowing how the Chargers’ organization has operated for the last several years, that is probably wishful thinking, however.

After all, appearing in the hype video announcing what uniforms the team will be wearing in 2019 at home was none other than… Junior Seau.

Yes, Seau is undoubtedly one of the greatest players in Chargers history. No problem there, but… one, he was a San Diego Charger, and two, he shot and killed himself at the age of just 43-years-old, leaving behind four kids, and three, the Seau family sued the NFL in 2013 over the brain injuries Seau suffered during his career – a lawsuit they just settled in October 2018.

Needless to say, reactions from some spurned Chargers fans (and others) with regard to the team’s use of Seau to market the team were pretty much what one would expect.

Take Seau out the video. He's rolling over in his grave right now.

To have the audacity to show Seau in that clip. I hate them so fuckin much!

How dare you claim junior seau

You don’t have any history in Los Angeles, you did not name one Los Angeles charger, Seau, Fouts, Tomlinson, all San Diego Chargers. Nobody wants the chargers here

Are the Chargers seriously using Junior Seau to market their football team? https://t.co/FY2QuL4mhq