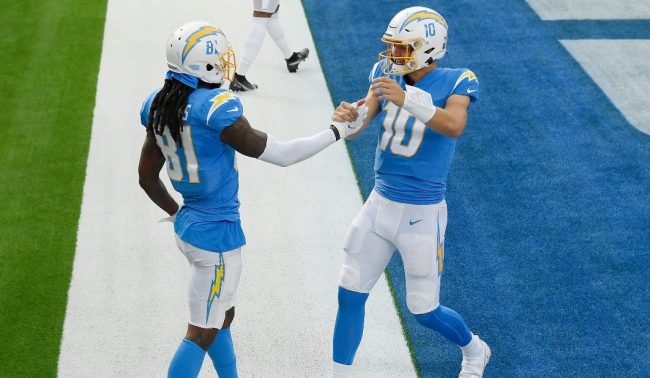 The Los Angeles Chargers had a big offseason as the front office has stacked the offense and defense. Justin Herbert is entering the third year of his career and the franchise is hopeful he can lead the team to a playoff appearance this year. Things are looking up and Herbert is ecstatic about the upcoming season. Especially after the organization re-signed Mike Williams.

During an appearance on the NFL Network, Justin Herbert opened up about his reaction to the Chargers re-signing Mike Williams. The two put on a spectacular performance last season and bringing back the big-bodied receiver seemed like a no-brainer decision for the front office. Having said that, Herbert shares his reaction to Williams’ extension in the video below.

"To have a guy like that on the outside, it helps me a ton."

Justin Herbert tells @mattmoneysmith and @MoveTheSticks that he was pumped to hear @darealmike_dub got re-signed in the offseason 🙌 pic.twitter.com/kWu58tRHfA

This was a brilliant move for the Chargers. Not only did they retain Mike Williams to keep their wide receiver core strong, but they made Justin Herbert incredibly happy. Williams proved to be a reliable deep threat for Herbert, which makes them the perfect duo. LA’s superstar quarterback has the most accurate deep ball in the NFL since he took over as the starter.

Los Angeles is going to be a problem for many opponents throughout the 2022 season. Although the AFC West is completely stacked, the Chargers have a real chance to be the best team in the league. Especially with Justin Herbert leading the way.

Look for these two to connect often as they have built unique chemistry on the football field. Now is the time for Justin Herbert to lead the Chargers to his first playoff appearance. If he can do that, then they’ll have a chance to go on a run much like Joe Burrow and the Cincinnati Bengals did last year.