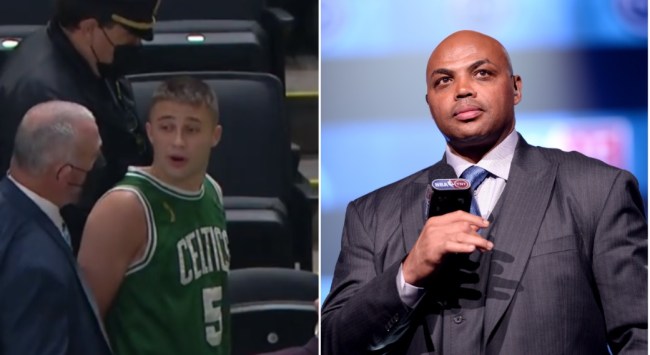 Charles Barkley has some harsh words for the Celtics fan who apparently threw a water bottle at Kyrie Irving.

After Sunday night’s Celtics-Nets playoff game, a Celtics fan was seen appearing to throw a water bottle directed at the Nets star.

Here is the video from @YESNetwork. The bottle narrowly misses Irving. This is just the latest incident in a string of recent unacceptable behavior from fans toward NBA players. https://t.co/UG271PaCGw pic.twitter.com/jSnaYR4ETU

The fan was immediately arrested by police and has since been banned by the Celtics.

A league source confirms to ESPN that the fan who allegedly threw the water bottle at Kyrie Irving has been arrested.

In response to the water bottle being thrown at Kyrie Irving by a fan, a spokesperson for TD Garden says in a statement:
“We have zero tolerance for violations of our guest code of conduct, and the guest is subject to a lifetime ban from TD Garden.”

During halftime of the Clippers-Mavericks game, the Inside The NBA crew reacted to the incident and Barkley said he wanted the police to take the “punk ass” fan downstairs so Kyrie could handle him.

“Look at that little punk ass, just take him downstairs and let Kyrie handle that”