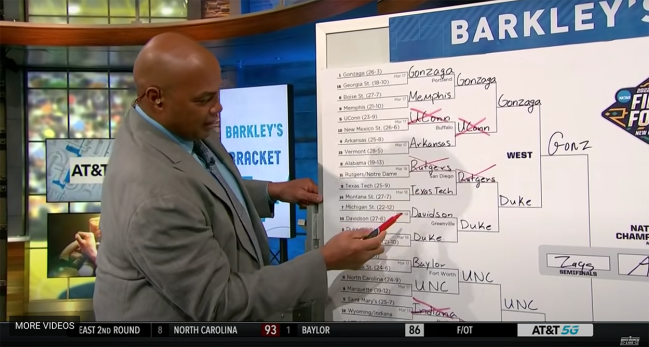 Charles Barkley is one of the most entertaining analysts on television. The 59-year-old Hall of Famer is part of the NBA Tonight crew on TNT and joins Turner for its CBS/TNT/TBS/truTV studio team for March Madness every year.

Barkley does an incredible job of keeping things light and fun while providing just enough basketball knowledge to keep things on track. And he is never afraid to laugh at himself, which is a trait that goes a long way.

Take Barkley’s Griddy, which could use some work, for example.

Although he might know a lot about the game of basketball and is always having a good time, he is not very good at picking games. Certainly not this year, at least.

Last night, on the first Saturday of the NCAA Tournament, Barkley broke down his bracket live on the Turner broadcast in classic Barkley fashion. His self-deprecating humor and slight confusion with how a bracket works is absolutely perfect.

Here is the full segment, enjoy: