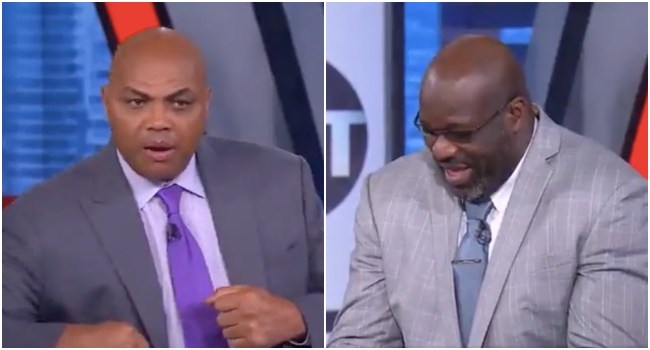 The phrase “national treasure” gets thrown around far too often, but I think it’s safe to say that most sports fans agree that TNT’s Inside the NBA is a national treasure.

Since first premiering all the way back in 1989, Inside the NBA has gone on to become one of the most beloved sports programs in American culture, racking up fifteen Sports Emmy Awards in the process.

What makes the show so successful, obviously, is its personalities: with the likes of Shaquille O’Neal, Kenny Smith, and Charles Barkley (and the great Ernie Johnson, of course, trying to keep it all together) on the panel, the potential for unscripted comedy is perhaps the highest of any sports show currently on air.

That foundational quality came to the forefront once again on Thursday night as Shaq — with a classic “guys bein’ dudes” sense of humor that we seemingly never grow out of — simply could not keep it together as Chuck explained what to do when a “guy is banging you”: “feel their body.”

The whole Barkley banging sequence had Shaq in tears pic.twitter.com/t56fxaIRcz

In recent years, Charles Barkley has been publically discussing the idea of retirement, so here’s to hoping the newly merged Warner Bros. Discovery backs up the Brinks truck to his house to convince him to stick around for a few more years. Draymond Green will (likely) be a great full-time addition once he retires, but he ain’t not Chuck.