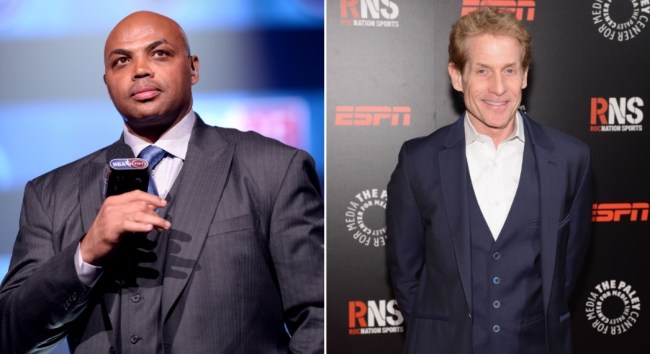 Charles Barkley is not a fan of Skip Bayless.

Over the years, Barkley has voiced his disdain for the FS1 hot take artist. Back in 2017, Barkley told Dan Patrick that he wanted to beat Bayless like a dog on live television.

Barkley: “You know what we should do for ratings? If I get a disease and I’m gonna die, how about you get Skip Bayless in here and I’ll kill him live on national television.”

On Thursday night Barkley once again fired another shot at the FS1 host. During the latest episode of Inside The NBA, the Lakers were featured on the show’s “Gone Fishing” segment that makes fun of teams eliminated from the playoffs by photoshopping famous fans from their city onto a fishing boat.

The Lakers’ “Gone Fishing” photoshop featured a mystery person in a full body cast and wheelchair who Barkley said was Bayless because if they were ever put in a room together “that’s what he’s gonna need- a full-body cast.”

Kenny Smith: "Who's the guy in the wheelchair?"

Charles Barkley: "That would be Skip Bayless if I ever got him in a room by myself… if I ever get Skip Bayless alone, that's what he's gonna need- a full body cast." pic.twitter.com/hEL8LObOvh

Maybe they should put Barley and Bayless on the Floyd Mayweather-Logan Paul undercard this weekend.