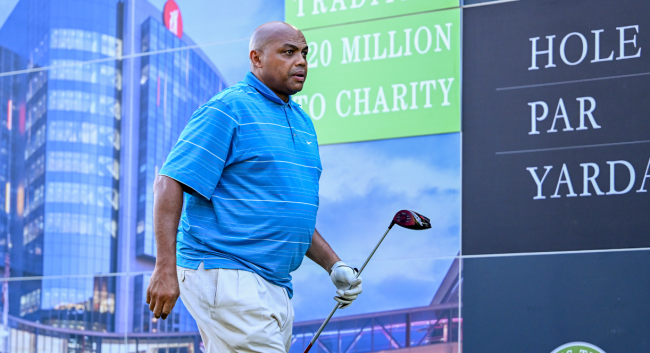 Charles Barkley, who appears in multiple commericials for FanDuel and regularly gives out his picks on Inside The NBA, complained this week that there is too much sports gambling these days.

“There’s too much of it,” Barkley said during a media event this week at the American Century celebrity golf tournament. “We’ve got people in the stands betting on who’s going make the next free throws. Think about that. If I was a scumbag, I’d look at a guy in the stands, a friend, and say, ‘Yo, I’m going to miss both of these free throws.’ Now, that’s cheating.”

Barkley added, “I had an NBA owner say in the next three to five years … they’re going to be making triple what they do on television revenue [from sports betting]. And when you get to that point, I think it’s really scary. I mean, c’mon man, if you’re able to bet on if a guy’s going to make two free throws in the middle of a basketball game, that’s obsessive.”

“Listen, gambling’s always been part of sports,” he continued. “That’s why the NFL is King Kong, but I am concerned that you can sit in the stands and make bets now in the middle of a basketball game. But, like I said, the toothpaste is out of the tube, and I don’t know how to put it back in.”

The irony of Charles Barkley, gambling website spokesman and the man who admitted that he lost $1 million dollars on gambling at least 10 to 20 times, saying there is too much sports gambling these days was not lost on many fans.

He's a brand ambassador for FanDuel

Charles Barkley is a degen gambler who shills for gambling sites on TV. Nearly everything he's on is sponsored by gambling. He BUILT this, helps people ruin their lives daily. WTF Chuck?

By the way, Barkley is also the same guy who admitted betting $100,000 on himself to finish in the top 70 last year at this very same golf tournament (which isn’t even allowed, so it was refunded to him). He finished 76th. Take that for what it’s worth.

Click here to Bet $5, Get a $200 guaranteed bonus when you activate our FanDuel promo code.