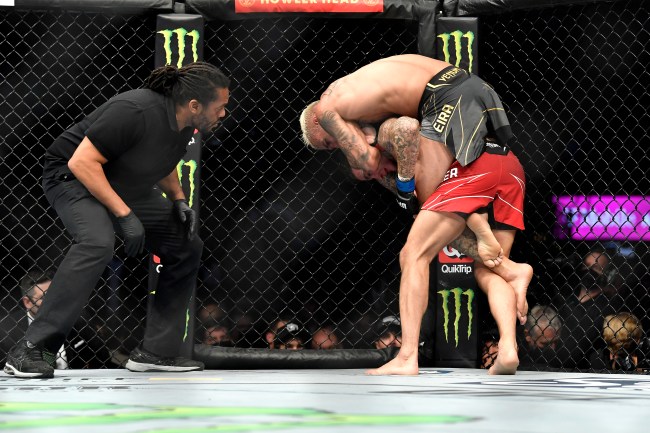 Charles Oliveira continues to deliver in UFC title fights. He won the belt in an absolute slugfest with Michael Chandler. Now he has followed that up with a submission over Dustin Poirier in a back and forth title defense.

The fight delivered the fireworks we expected right from the start. Both men slung leather for the entirety of the first round. Poirier focused his attack to the head while Oliveira mixed it up to the legs and body. It was Poirier that ended up getting the better of the round and even dropped Oliveira at one point.

Round 2 didn’t go quite so well for Poirier. Oliveira managed to drag him into his world. Oliveira got on top on the ground, where he is incredibly dangerous. Once Oliveira got top control, he made it count. He slammed elbows down on Poirier and never gave The Daimond any hope of getting up.

Things got even better for Oliveira in round 3. He shot for a takedown early in the round and turned it into a back take. Poirier didn’t have a chance from there. Oliveira quickly sunk in the rear-naked choke and got the tap just over a minute into round 3.

The loss puts Poirier in a tough spot. He is now 0-2 in his challenges for undisputed titles. He also now has lost pretty definitively to the reigning champ. There are some interesting non-title fights left for him and a potential 4th fight with Conor McGregor, but it’s hard to see his path to the belt.

Charles Oliveira continues to prove that he is the best lightweight in the world. With this title defense he solidifies just how far ahead of the pack he is right now. Now he’ll draw Justin Gaethje, who we saw offer no resistance on the ground when he fought Khabib Nurmagomedov.

Gaethje will certainly be Oliveira’s next title challenger, but right now the fight that should really be on everybody’s mind is Oliveira-Khabib.

Oliveira has all of the tools to challenge Khabib and if anything could ever get Khabib to come back it would be a real threat to his legacy. Charles Oliveira is every bit of that.

At the end of the day, no matter who Oliveira fights next, it’s sure to deliver excitement because all Charles Oliveira does is put on exciting fights.