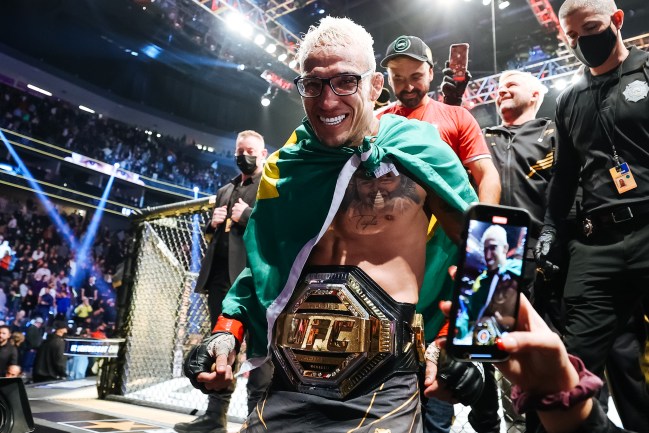 Charles Oliveira wants to cash in on his lightweight title reign. At least, that’s what it looks like he’s trying to do with his next title defense.

Oliveira told Sherdog yesterday that he wants to fight Conor McGregor next and will be waiting for him in May.

“May would be a wonderful date,” he said. “Conor challenged me asking a date, and tweeted Ireland vs. Brazil 2. Not only him, but also myself and all the world wants to see that fight. So let’s make it happen. I´m waiting for him in May. It may be in welterweight, lightweight or middleweight, with my title on the line or not. Just choose and I´ll be ready.”

McGregor was certainly not the opponent fans were expecting for Oliveira’s next title defense. Instead, that was supposed to be Justin Gaethje. Oliveira gave an interesting explanation for why he’d give the next shot to McGregor over him.

“Gaethje was knocked out by Poirier, who I just submitted. He was almost knocked out by Chandler, who I beat via TKO, but I´m a UFC employee,” Oliveira said. “If they choose that I should fight Gaethje next, I’ll be ready too.”

It’s an odd stance to take when the alternative is Conor McGregor. McGregor was just finished twice by Poirier and didn’t make it through two rounds in either fight. Gaethje’s loss to Poirier was a 4 round slugfest and Fight of the Year candidate.

Gaethje was not pleased about the possibility of McGregor skipping the line when he was asked about it earlier this week.

.@Justin_Gaethje is not here for your “Conor McGregor may skip the line” talk 👀

If Charles Oliveira does fight McGregor next it will be the biggest payday of his career. That will play a major part in his decision making after he recently revealed the bleak reality of how much he makes on performance bonuses.

Hopefully this is just talk because no title challenger has ever deserved it less than Conor McGregor right now.