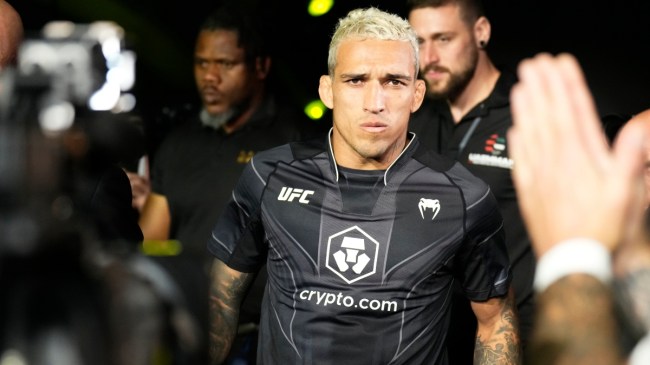 Islam Makhachev shocked the world after defeating Charles Oliveira in impressive fashion. Many look forward to a potential rematch and it sounds like it may happen.

In fact, Oliveira lays out his exact plans for 2023 as he aims to get back on top of the UFC rankings.

According to MMA Fighting, Charles Oliveira isn’t rushing back into a rematch with Islam Makhachev. However, he is very adamant about facing the current lightweight champion later in the year.

It’s notable that Oliveira doesn’t even mention anything about the belt. He gives the vibe he’s more interested in redeeming himself from his loss. Even if a title isn’t on the line.

The lightweight division could be a roller coaster this year. Especially with Islam Makhachev taking on Alexander Volkanovski in February. So, we’ll see how it plays out. Eventually, Charles Oliveira is going to get back in the mix for the belt. he claims, “We have to aim high. Maybe fight in the United States in May and then come back to fighting in Brazil by the end of the year — if it’s in Sao Paulo, even better —, and who knows, maybe fight for the belt again. That would be great,” per MMA Fighting.

With that said, keep on the lookout for any updates regarding Oliveira. It’s unknown who he will be facing come April or May, but it will be a great matchup regardless. There are a ton of top-tier opponents in the lightweight division, so he’ll have plenty of options to choose from.