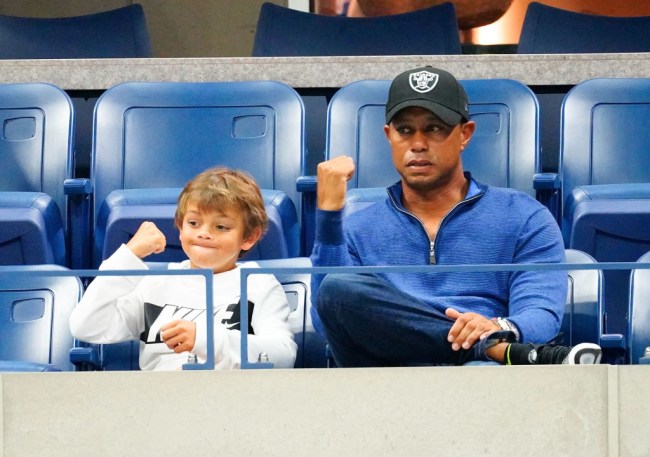 It shouldn’t come as a surprise that Tiger Woods’ son, Charlie, has an incredibly pure golf swing. The thing is, nobody had seen it, outside of people that have witnessed it in-person. On Saturday night, however, video emerged of Charlie Woods hitting a shot on the driving range with dad and caddie Tiger posted up behind him.

Charlie’s swing is fantastic, and not just for a 10-year-old, it’s as pure as any golf swing out there.

From the tempo, the smooth transition, incredible position at the top of the backswing and the pop he shows through the ball is just awesome. He’s certainly got a little bit of Tiger in his move, too, especially when it comes to his setup at the ball and finish.

The Woods duo was getting set to play in a junior tournament in Jupiter at Club Med Academies. Woods was on the bag for Charlie, who reportedly posted a round of 5-over 41, good enough for a T-9 finish in a field of 16 at the event where the winner shot 37.

Sure, Charlie may not have won the event, but he certainly had the best golf swing out there and that counts for something.

Also, I can’t fathom walking out to the range getting set to tee it up in a junior event and Tiger is out there watching his son put on a stripe show on the range.

What an awesome, awesome experience these junior events have to be for Charlie and every other kid out there getting a glimpse at Tiger simply playing dad and caddying for his son.