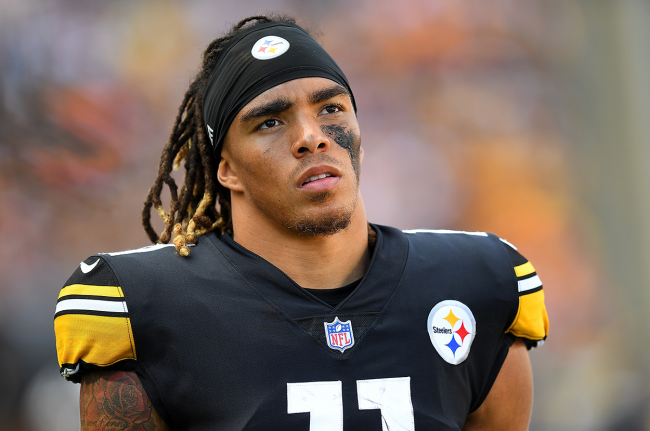 Kenny Pickett has been working with the third-team offense during OTAs and minicamp, but he remains in the mix for the starting quarterback job this fall. As the Steelers try to figure out their future at the position, head coach Mike Tomlin is trying his best to talk himself into being comfortable with the uncertainty.

Meanwhile, Pittsburgh’s rookie quarterback is impressing his teammates. Not necessarily with his play, but with his football IQ and his playbook. Chase Claypool in particular.

Claypool, who has been in the headlines recently for his bold claim about how he sees himself as a talent in comparison to other receivers, completely self-owned himself while discussing Pickett’s intelligence. He is particularly impressed with the rookie’s ability to learn new plays and a new offense so quickly.

According to ESPN’s Brooke Pryor, even Claypool can’t keep up.

“He understands everything,” Claypool said to Pryor. “Sometimes I’ll be like, ‘Yo, what do I have here?’ Because we have some new plays going in, and he’ll tell me right away.”

So, while talking about Pickett being impressive, Claypool indirectly diminished his own ability to learn the playbook. His rookie quarterback is on it right away, but it is taking the veteran receiver longer to grasp the new installs and he has to turn to the rookie for help.

While that is a great look for Pickett, what does it say about Claypool?

According to Pryor, Pickett is currently headed to Florida to train with Mitch Trubisky. It sounds like maybe Claypool should go with them.