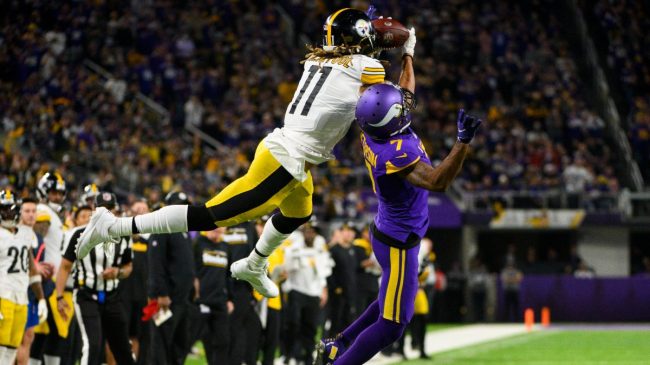 Chase Claypool is not lacking confidence this offseason. The pass catcher is hoping to help the Steelers get back to the NFL Playoffs in 2022.

Last year, the wideout hauled in 59 passes for 860 yards and a pair of touchdowns. This year, Claypool is expecting a breakout season. And he’s certainly talking the talk this summer.

Claypool appeared on the I Am Athlete podcast to talk about the upcoming year. One comment, in particular, is catching the attention of fans around the league.

The Steelers star says that when he’s on, he’s a top-three talent compared to the rest of the league’s wide receivers.

Many around the NFL are taking notice, and they’ve been quick to chime in on social media.

Folks around the league were quick to comment on Chase Claypool’s response. Obviously, many were quick to note that Claypool wasn’t the best receiver on his own team last year.

I can name 40+ receivers I’d take over Chase Claypool https://t.co/upYmLlau88

Others, though, like the confidence they’re seeing from the pass catcher.

In all seriousness, Chase Claypool has always had the build to be a great WR. Rare size & speed. The issue has been putting that together in a consistent manner.

But, there’s no doubting that the tools are there to be a dangerous weapon.

Claypool is still young, but he’s got the tools to develop into one of the league’s better pass catching options. He may want to tone it down on the celebrations, but he continues to improve as a player from year to year.

We’ll see how he fares with a new QB in Pittsburgh.