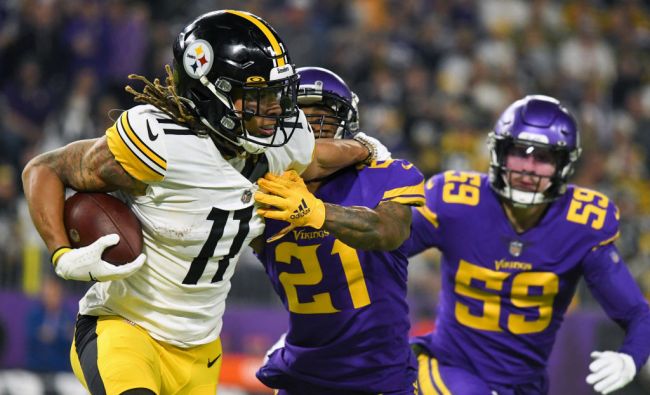 After being down 29-0 at one point, the Pittsburgh Steelers mounted a furious second-half comeback, cutting the score down to 36-28 with just seconds to go. Having the ball with a chance to tie the game, the Steelers began their drive within their own 5-yard-line and ultimately brought it down to the Minnesota Vikings’ redzone.

The final play of the game was an incomplete pass to tight end Pat Freiermuth in the endzone, but the ball was knocked away by Vikings’ safety Harrison Smith.

However, had wide receiver Chase Claypool not celebrated a first-down catch during the drive, the Steelers would’ve likely had time for at least one more play, leading NFL fans to rip the second-year wide receiver for his immaturity and lack of game awareness.

so dumb, so clueless pic.twitter.com/cy7wSkv4XE

Chase Claypool celebrating his first down when his team trying to spike the ball pic.twitter.com/UhjKkubB47

Claypool celebrating when you need a spike 😂

Claypool is so immature man. Getting near end of year 2. It’s the beginning of the game and you’re screwing your team over with selfish decisions.

Claypool giving a first down pose while the clock is ticking and his teammates have to take the ball out of his hands to give to ref speaks volumes.

Did Claypool catch the ball and point "first down" in a 2-minute drill??? Sometimes the immaturity of young players drives coaches nuts

Chase Claypool celebrated a first down with no timeouts left and wasted 3 seconds.

Could’ve had another shot at the end with those 3 seconds. pic.twitter.com/g6lztnE7Mg

Chase Claypool celebrating a catch with his team around him trying to get in formation with no timeouts and seconds ticking off the clock was art.

Chase Claypool celebrating a 9 yard catch with 36 seconds on the clock pic.twitter.com/opJvLSdTLx

Lol Claypool just wasted like 12 seconds with his first-down signal.

Following the Thursday Night Football loss, the Pittsburgh Steelers dropped to 6-6-1, which puts them at third place in the NFC North. As for the Minnesota Vikings, the win took them to 6-7. The Steelers’ 2021 season will resume on Sunday, December 19 when they take on the Tennessee Titans, while the Vikings will play the Chicago Bears on Monday, December 20.

Coincidentally enough, Claypool made headlines earlier this week for suggesting that the Steelers should play more music at practice, a suggestion that was wholly dismissed by Steelers’ head coach Mike Tomlin, who said in response: “Claypool plays wide out and I’ll let him do that — I’ll formulate the practice approach and I think that division of labor is appropriate.”