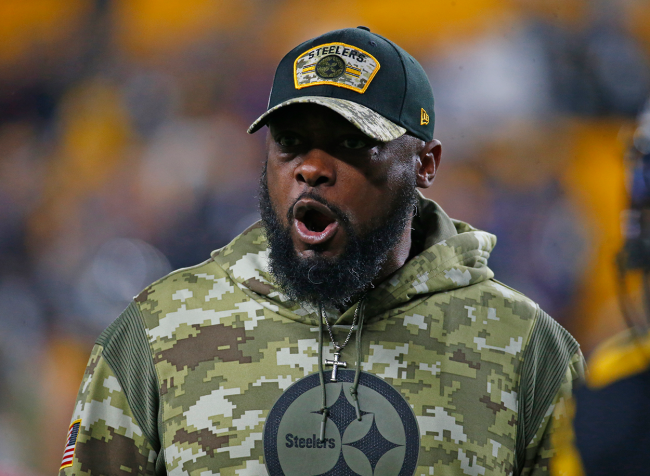 For the first time since 2004, the Pittsburgh Steelers do not know who will be their starting quarterback come Week 1. But head coach Mike Tomlin doesn’t seem worried.

After drafting Kenny Pickett in the first round of the NFL Draft and signing Mitch Trubisky, it will be a three-man competition with Mason Rudolph for the starting job. As things currently stand, it seems like Trubisky will be the starter with Rudolph as the backup and Pickett waiting in the wings.

However, there is a lot of time for many different scenarios to play out. Rudolph could earn the starting job at training camp this summer, or he could be released. Trubisky could win the job or be moved to the bench. Even Pickett could find his way to taking the first snap in Week 1.

Nobody really knows what is going to play out with the quarterbacks in Pittsburgh, even the team itself.

Tomlin recently appeared on The Pivot Podcast with Ryan Clark and spoke about the past and future at the position. He said that watching a quarterback like Ben Roethlisberger “messes up your perception of what’s regular and what’s not” in terms of ability and talent. In addition, Tomlin said that he enjoyed the comfort Roethlisberger brought to the position, meaning that he didn’t have to worry about who would be under center each year.

That is not the case ahead of the 2022 season now that Roethlisberger is retired, but Tomlin is “excited about being uncomfortable,” which is a wild spin zone in itself. But he continued further and went on an unhinged diatribe about the quarterback situation that seemed like he was trying to talk himself into feeling better about the uncertainty.

“I just view the challenges of what lies ahead in that way,” Tomlin said. “First of all, I’m looking forward to the anxiety associated with that uncertainty. To have to stand and deliver, to live out what we believe in — the standard is the standard. It’s like McDonald’s. You know what a No. 1 is. It doesn’t matter what corner of the globe, a No. 1 is a No. 1, and that’s what I want Pittsburgh Steelers football to be. So it doesn’t matter who puts their hands underneath the center, as far as I’m concerned. But, with all that cool stuff being said, it’s scary. But exciting.”

Uhhhhhhh…. what? It’s easy to see what Tomlin is doing here. He is trying to find the good in the bad. Well, not the bad, but the unresolved.

But did he really accomplish what he was trying to accomplish?

From where I’m sitting, it seems like Tomlin is talking himself out of being nervous and never really went anywhere with his point. Maybe that’s just me.

Either way, the Steelers need to figure out what’s next at quarterback.