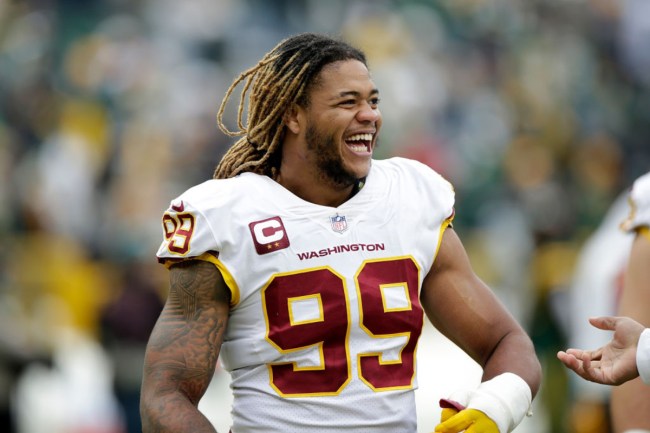 While there are still plenty of games left on the schedule, Chase Young currently finds himself in the midst of a sophomore season slump. The former Ohio State standout has managed to record just 1.5 sacks on the year, which is one of the reasons Washington’s defense has just been flat out bad this season.

After recording 7.5 sacks during his rookie campaign a year ago, many are wondering why exactly Young hasn’t been able to produce anywhere close to those same numbers so far this season.

During Thursday’s press conference, a reporter asked Young if missing OTAs earlier this offseason may be playing a role in his lack of pass rush. Young missed OTAs because he was filming commercials and it’s safe to say he doesn’t regret that decision one bit.

When asked about missing OTAs to shoot commercials — and if that somehow has contributed to a slow start, Chase Young said, "I was making money baby. Got to make the money. None of you all would have ducked the money. It's a job, just like you all do your job I do my job."

Young was simply chasing that cheddar, and you can’t blame him at all for that.

This may be breaking news to some, but NFL careers don’t typically last all that long. Young is simply making as much money as he can while he’s still a big-time name in the sports world, which can disappear at the snap of a finger.

Those who may criticize Young for shooting commercials during OTAs or for the honesty he displayed while answering this question are ludicrous.

Young certainly wasn’t the only NFL player to skip out on OTAs earlier this year and he sure as hell won’t be the last.