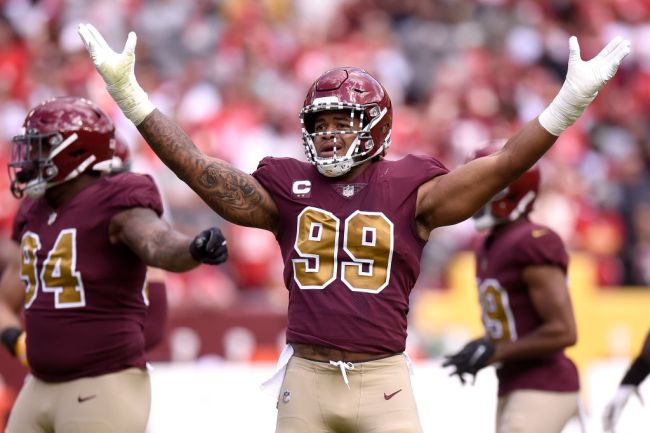 The Washington Football Team retired Sean Taylor’s number ahead of Sunday’s game against the Chiefs and defensive end Chase Young chose to pay tribute in the coolest way possible. Taylor, who passed away in 2007 at just 24 years old, was known for a few things.

He was one of the hardest hitting players in history, flew around like a banshee, and always had a unique look.

Taylor was a unanimous All-American at Miami in college and was drafted No. 5 overall by Washington. He recorded more than 70 tackles in each of his first two seasons and had 111 in 2006.

After his financé gave birth to their son in 2007, Taylor’s teammates said that the season was going to be a personal turnaround for the Miami-native. He made 42 tackles in nine games before his tragic death.

On Nov. 26, Taylor heard noises in his home and was shot in the upper leg by an intruder when he went to investigate. The bullet struck Taylor’s femoral artery and he died the following day.

Washington shared the impact that he left on the league with a video on Sunday:

And now his number will never again be worn in Washington.

Taylor’s play on the field speaks for itself. Not only was he a remarkable athlete, but he would tape his facemask in extremely unique fashion.

To honor Taylor on the day of his number retirement, Chase Young used the same tape job against Kansas City:

What a cool way for Young, who has spoken before about how he was a fan of Taylor’s growing up, to honor the late legend.