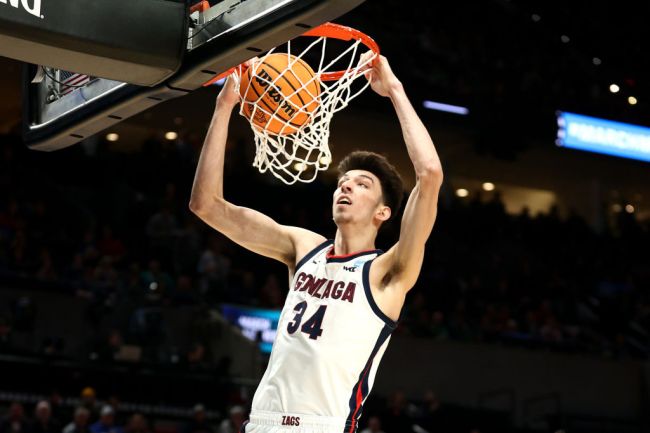 Chet Holmgren’s draft stock has had a weird week. On the day of the NBA Draft lottery, it was reported that teams were actually scared to pick Holmgren because of his build. Since then, he has done nothing but give the Orlando Magic reasons to make him the top pick in the draft.

Yesterday, Holmgren made the shocking reveal that he actually does lift weights and eat, likely lessening some of the fears about him. Now he has followed that up with another great quote that should make it very difficult not to take him early in this draft.

Holmgren was asked in an interview who he believes the best player in the NBA is. He told the interviewer that in 2 months it’ll be him.

We asked potential No. 1 pick Chet Holmgren who he thinks the best player in the NBA is 👀 The seven footer doesn’t lack confidence 💯 @ChetHolmgren pic.twitter.com/GOYqpCjTYs

While that may be a bit of a stretch, it’s the kind of confidence you love to see out of a player you could potentially be spending the top pick in the draft on. If he keeps giving interviews like this, Holmgren might have the top spot in the draft locked up before he even works out for the Magic.

Now the next time somebody asks a bunch of random fans on the street what they have to say to the team’s President of Basketball Operations, their answers will al be “draft Chet Holmgren” instead of whatever is going on in this video.