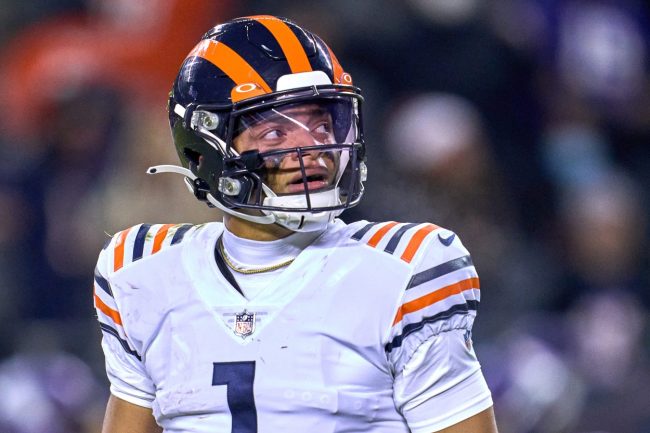 The Chicago Bears have had two winning seasons in the last 10 years and have not reached the NFC Championship since 2010. Now, with a head coaching vacancy, the team is tasked with finding the right person to come in and get back to winning.

Per a report from The Athletics’ Mike Sando, there is interest in the job around the league. It just might not be for the reason that you would expect.

When the Bears drafted Justin Fields with the 11th-overall pick in April, the organization was hopeful that he would be the future of the franchise. He was not supposed to start in 2021 and began the season as the backup, but between injuries to Andy Dalton and poor play with even worse results, Fields got a shot.

In his 12 games played, and 10 games started, the former Ohio State and Georgia quarterback completed less than 60% of his passes for 1,870 yards and seven touchdowns. He also threw 10 interceptions, was sacked 36 times, fumbled 12 times and won only two games.

Fields’ poor play was not entirely his fault, as the offensive line and weapons around him were not of much help, but it was a bad first year performance. It was certainly not what Chicago and its fanbase was hoping for out of the quarterback who is supposed to be the future of the franchise.

However, there is a lot of time to develop Fields.

As a result of the young quarterback, who had two impressive years at Ohio State in 2019 and 2020, the expectation is that the next coach to come in would be someone who could help get Fields back on track. Sando is reporting that is not necessarily the case.

He recently ranked the eight current NFL head coaching vacancies by their appeal to candidates. To do so, he spoke with five NFL team executives and coaches about the criteria they considered most important.

“From a roster construction standpoint, Chicago is a very desirable location if you ask me, including the fact that you could possibly trade (Justin) Fields,” said a coach who analyzed the Bears’ roster but did not vote in Sando’s poll.

That’s an interesting thought. Coaches are weird about having “their guy” in a system, but the idea of trading Fields less than a year after he was drafted is certainly a shock.

Is there any value in what the coach said to Sando? Who knows. Simply the fact that the idea has been floated around at all is something that would come as a surprise to many.