The Chicago Bears Pulled Off One Of The Wildest Two-Point Plays Ever, Blew Twitter’s Mind 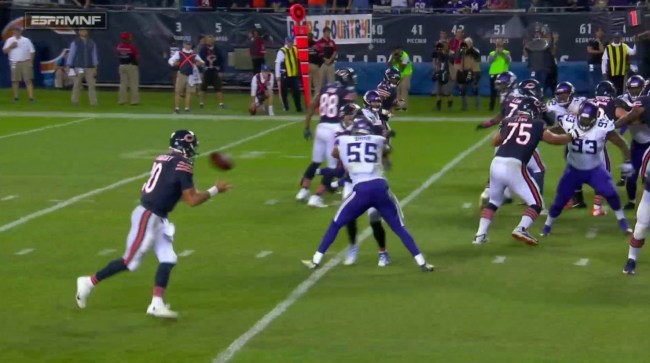 The Chicago Bears may have fallen to 1-4 with a 20 to 17 loss to their division rivals the Minnesota Vikings on Monday night, but at least they and their fans have a couple of things to still be excited about.

For one thing, Mitch Trubisky showed in his first start for the Bears that he’s no Mike Glennon (that’s a good thing) and second, they pulled off one of the wildest two-point conversions you’ll ever see.

Down 17 to 15 after scoring a touchdown, the Bears went for two on a play that went a little something like this: Trubisky handed the ball off to running back Jordan Howard, who then handed it to tight end Zach Miller on a reverse, who then pitched it back to Trubisky for the easy walk-in conversion.

Sound amazing? Wait til you watch it…

And here are some of the stunned and amazed reactions…

This is the greatest 2-point conversion I've ever seen.#Bears pic.twitter.com/4omPMr6fVW

That was a great 2-point play!

Trubisky hands off to Howard, Howard flicks it to Miller, Miller zips it to Trubisky for two. We think. But we know we got 2. And we know it's tied 17-17.#DaBears #MINvsCHI pic.twitter.com/UXn6mh2grV

That two-point conversion the Bears just ran might be the best-designed play I’ve ever seen. #MNF #DaBears

That was the greatest two-point conversion trick play I’ve ever seen in my entire life. Genius. #Bears #Trubisky

I've been watching football my whole life and that Bears 2-point conversion is the coolest redzone play I've ever seen. #CHIvsMIN

Can't believe the Bears wasted that awesome play on a measly two-point conversion.

I’m not sure what I’m more shocked with……that incredible 2 point play or the fact that it came from a John Fox team.

Bears two-point conversion is the greatest play design and call EVER!

That was one of the coolest 2 point conversions I have ever seen. Bears!!!!!

Whomever drew up that 2 point conversion play deserves a RAISE

Only one that is on the same level is the Boise State Statue of Liberty play. That one was bigger stage but this one may have been cooler!

#Bears QB Mitch Trubisky on the 2-point conversion: "It was sweet right?"