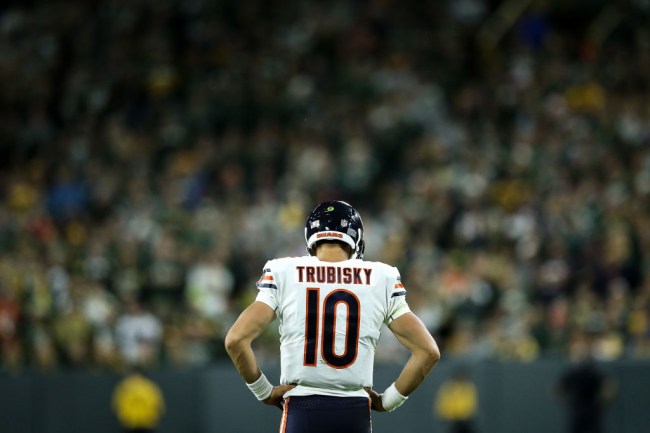 I should let Bears fans grieve in peace. It would be the humane thing to do. But this is the internet baby! The fucking wild wild west!

For those who need a reminder, the Chicago Bears pissed away a 20-0 lead after Aaron Rodgers returned with 9 minutes, 10 seconds left in the third quarter after getting a bicentennial knee put on in the locker room. After Khalil Mack bullied the ball away from DeShone Kizer TWICE, Rodgers returned to throw for 273 yards and three touchdowns after halftime and thwarted any inclination that this Bears teams are different from years’ past. At least for now.

The image captures the Chicago Bears offense knocking on the door of the Packers end zone–third down from the three-yard line. Mitch Trubisky appeared to have a wide open Trey Burton calling for the ball in the end zone after he was left uncovered off the snap. Instead, Trubisky dumped it off in the flat for a negative five-yard gain.

Look at this still image.

On a third down from the Packers' three-yard line, this play went for -minus five yards. Bonus points if you spot the open player…. pic.twitter.com/sLrsDmvK04

Granted, the video of the play appeared to be less glaringly obvious, but still…a touchdown there would have sealed the game and provided the Bears with a much needed infusion of confidence.

It’s going to be interesting to see how the Bears bounce back from this.