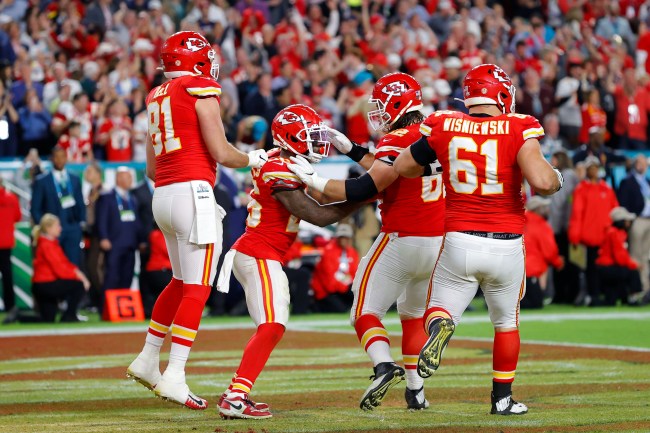 The Kansas City Chiefs are the Super Bowl LIV champions. They finally kicked their high-powered offense into the next gear in the game’s 4th quarter and won the game 20-31.

The over/under for the game was set at 53.5 points (give or take a few, based on the sportsbook). Pretty much everyone I spoke to was going to hammer the Over because of Kansas City’s high-octane offense but the first quarter ended 3-7 and the teams were tied 10-10 at halftime. It wasn’t exactly the display of unstoppable offensive weapons that everyone expected to see.

Kansas City‘s first-quarter TD was made possible by the Chiefs converting their 4th down before scoring on the next play. I remember watching the team do their little shimmy and spin and turning to my brother-in-law and asking what that was all about. He didn’t know. I figured by morning someone would have the answers and SI’s Chris Chavez delivered.

Kansas City Chiefs offensive coordinator Eric Bieniemy was asked about that strange play and he explained that it actually came from a play run by the Michigan Wolverines in the 1948 Rose Bowl against USC. Here’s his explanation with a clip of the plays below:

“You know what that game, that play comes from – if I’m not mistaken – a 1949 Rose Bowl,” Bieniemy said. “I probably shouldn’t be giving this away. The Rose Bowl Michigan vs. USC. And so, it’s just a play that we’ve been working and wondering when we can polish it off. It was fun to watch. It was fun to watch. And those guys did a great job of executing it. I mean all that hard work and practicing that play for the entire season, it just worked and it paid off.”

Here’s that clip of the Chiefs converting 4th down before scoring their first TD of the game just seconds later.

Pretty cool. Chiefs OC Eric Bieniemy said they stole that first TD play from Michigan in an old Rose Bowl vs. USC. I looked, and yep. This is from New Year's Day 1948. Fritz Crisler = visionary pic.twitter.com/bcWp5BEf0h

*Forgive me on this. KC didn't score a TD on this play, just converted the fourth down right before their TD. Here's what they did: pic.twitter.com/tHmvex2O9y

I’m honestly shocked that there’s footage of this play from back then. I’m not so much blown away that the footage ever existed as much as I’m shocked that someone had this clip readily available and was somehow able to track it down in a matter of hours.