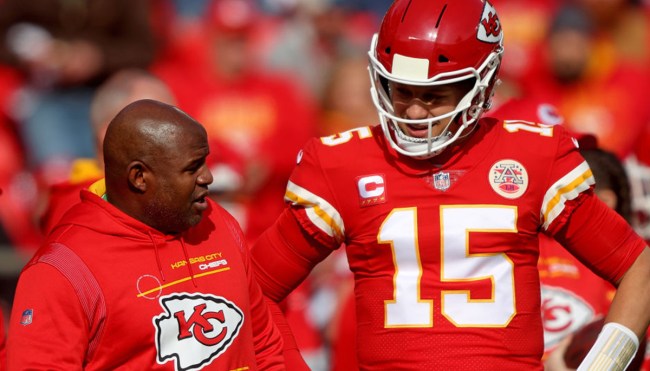 It looked like the Kansas City Chiefs were well on their way to appearing in the Super Bowl for the third year in a row after pulling out to a 21-3 lead with five minutes to go in the first half in this year’s AFC Championship.

The Bengals were able to cut that deficit to 11 and mounted a goal line stand with the help of a very questionable play call that brought the first half to an end, but the reigning conference champs were still in a pretty good place to retain that crown when they headed into the locker room.

Unfortunately, their inability to put any points on the board during that final drive turned out to be very costly, as Joe Burrow and Co. surged back to tie the game in regulation and ultimately walked away with a 27-24 win to punch their ticket to The Big Game.

There was plenty of blame to throw around following the loss, and while Patrick Mahomes willingly shouldered the burden, it didn’t take long for a storm of discontentment to form in Kansas City that’s continued to grow thanks to rumors concerning the scapegoat at its center: offensive coordinator Eric Bieniemy.

On Wednesday, Chiefs Kingdom—an operation that was formed in 1997 by an anonymous but well-connected insider who’s nabbed plenty of scoops in its 25 years of existence—published an in-depth article exploring the role Bieniemy allegedly played in the loss in addition to a number of other institutional issues sources says he’s largely to blame for.

UPDATED: Chiefs Kingdom opted to take the piece linked above offline on Thursday afternoon and posted a tweet explaining the rationale behind the decision, saying it had nothing to do with the substance of the article. As I’ve noted, the information covered below is based on allegations from various unnamed sources, but they have not issued any retractions concerning its content.

We've made a decision to take the EB story offline at this time. The reason and rationale is contained in the image below. We are not deleting the story nor are we re-writing it. This group is going to do the right thing, always. pic.twitter.com/A8fryV7l8f

The entire thing is worth a read, but it features a few claims that won’t exactly please Chiefs fans if the sources who contributed to the report are to be believed.

According to the insiders Chiefs Kingdom spoke with, Bieniemy and Mahomes have had their fair share of disagreements over the team’s offensive approach. That’s by no means a problem unique to the franchise, but one source suggested the OC has held a grudge against the quarterback since the team’s 31-9 loss to Tampa Bay in Super LV, as he apparently believes that abysmal offensive performance on the NFL’s biggest stage led to him being passed over for a potential job as a head coach for another squad.

The report states the animosity between the two men only continued to grow over the course of the season before coming to a head at the worst possible time in the AFC Championship.

While Mahomes caught plenty of heat for attempting to call a timeout the Chiefs didn’t have at the end of the first half, Bieniemy (who also has full control of the team’s offensive play calls) supposedly told him Kansas City still had one to use, which allegedly resulted in the QB confronting him after heading into the tunnel.

Another example of why situational football is so huge. Extremely risky play call, Mahomes trying to call timeout, seemingly not realizing they had none. Changed the entire game. pic.twitter.com/GpCrfCpyss

Chiefs Kingdom claims tensions continued to flare in the second half, as both Mahomes and Andy Reid are said to have taken issue with Bieniemy’s ill-fated gameplan. The offensive coordinator’s contract expired after the season, so while only time will tell what the franchise will do going forward, it’s hard to believe he’ll be on the sidelines next year if this report has any merit.