Chiefs Fans Seen Tailgating 7 Hours Before Kickoff Vs. Chargers Makes Them The Most Dedicated Fanbase Ever 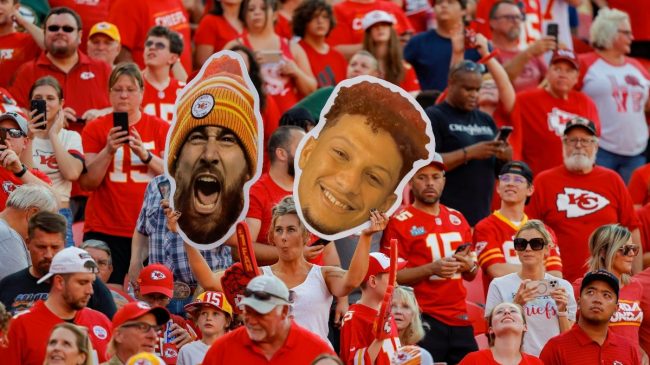 Thursday night’s matchups between the Kansas City Chiefs and Los Angeles Chargers has the potential to be one of the best games of the year. Patrick Mahomes is taking on Justin Herbert in what should be a dual for the ages. Kansas City fans are well aware of that and apparently have been tailgating way before any sane person should.

Chiefs Fans Prove They’re The Most Dedicated Fanbase Ever

On his way to work, James Palmer took a quick video of what it looks like at Arrowhead Stadium. The gates aren’t even open yet and people are tailgating in line. Yeah. Chiefs fans aren’t even in the parking lot yet. They’ve got their chairs pulled out in the driveway of the stadium partying it up like beautiful lunatics.

It’s 10:53 am. Kickoff for #chargers at #chiefs is at 7:15 pm only on @PrimeVideo. This is bonkers. Gates don’t open for a while! pic.twitter.com/YMcxaUElCo

No wonder Chiefs fans are loud as all hell in every home game. Kansas City has been a tough place to play for years. It sounds like Justin Herbert and the Chargers are going to have their hands full on Thursday night. Especially considering the home crowd has apparently been partying since before 11 A.M.

We’ll see how this game plays out though. Patrick Mahomes was on fire in Week 1 and hopes to put up similar numbers against the Chargers. However, LA has massively improved its defense, as they also looked great in the season opener.

It should be a fantastic matchup. We should expect fireworks, big plays, and an extremely loud crowd. Shoutout to Chiefs fans for being so dedicated to their team.