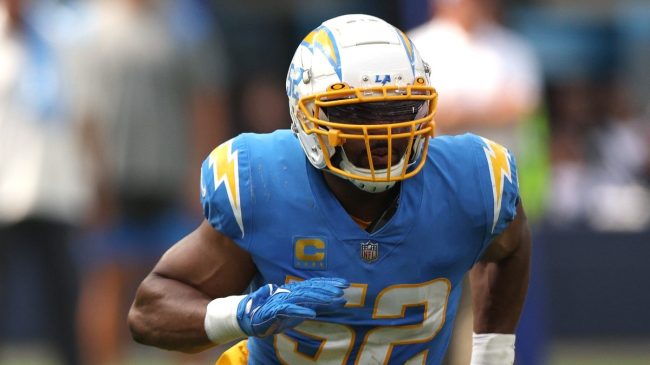 Khalil Mack made his debut with the Los Angeles Chargers in Week 1 and he looked amazing. He put up a ridiculous statline of five tackles (three for a loss), three sacks, and a forced fumble. Mack was a straight-up beast in the season opener, which bodes well for LA. However, his comments about his performance should scare the living daylights out of the Kansas City Chiefs.

Yeah. Imagine putting up monster numbers and claiming you weren’t at your best. According to Kevin Patra, Khalil Mack isn’t satisfied with his performance against the Las Vegas Raiders. He claims, “It wasn’t good enough. I left a lot of stuff out there and I have to get it corrected.”

If that’s the case, then RIP to the Chiefs’ offensive line. Especially considering Mack joined elite company in his Chargers debut, per Kevin Patra. “Mack became only the fifth non-rookie to have three-plus sacks in a debut with a new team (since individual sacks were first recorded in 1982).”

Not to mention, he’s playing alongside Joey Bosa as the two form arguably the best pass-rushing duo in the league. The Chargers have a beast of a defensive line and the Chiefs are going to have their hands full on Thursday night. Especially if Khalil Mack believes he can play even better than he did in his debut with LA.

Keep an eye on this team, as Los Angeles has the tools to be a legitimate contender this season.