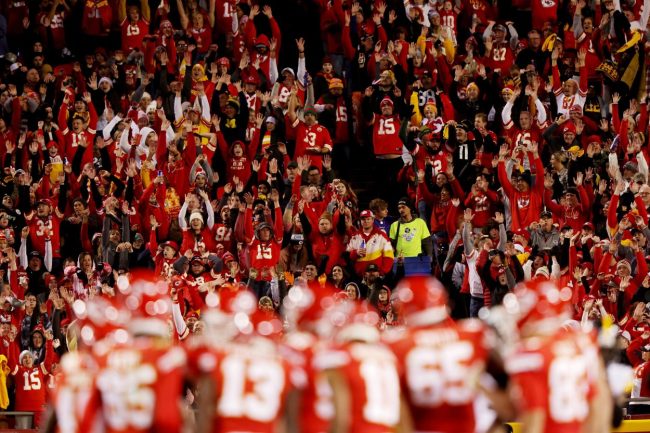 Although NFL fans from Kansas City and Buffalo are on opposing sides of today’s NFL Divisional Round playoff game, they came together in an act of solidarity prior to kickoff. On the big screen at Arrowhead Stadium, the team showed the ending of the Rams/Buccaneers game.

Both fanbases were rooting for Los Angeles. Well, more so, against Tom Brady.

The finish was crazy and the fans in Kansas City were on the edge of their seats.

After falling behind 27-3, Tampa Bay came back to tie the game with 42 seconds left. Playoff Lenny took a handoff on 4th-and-goal and found pay dirt to even the score.

However, that proved to be too much time remaining on the clock. Matthew Stafford found Cooper Kupp over the middle on second down.

On the next play, Kupp chunked off another big game but did not get out of bounds. Without any timeouts remaining, Los Angeles ran down to the ball and spiked it to set up a game-winning field goal attempt.

.@CooperKupp put the team on his back.

Meanwhile, across the country, Chiefs and Bills fans went bonkers as the kick went through the uprights. And when the broadcast cut to Tom Brady, loud boos could have been heard all of the way back in Tampa Bay.

The reaction from Arrowhead when the Rams won. #NFLPlayoffs pic.twitter.com/ImJU8m8PQx

The winner of the game between the Chiefs and Bills are not guaranteed to make the Super Bowl. But if they should, they will not have to face Brady and that’s enough for both sides to get behind.