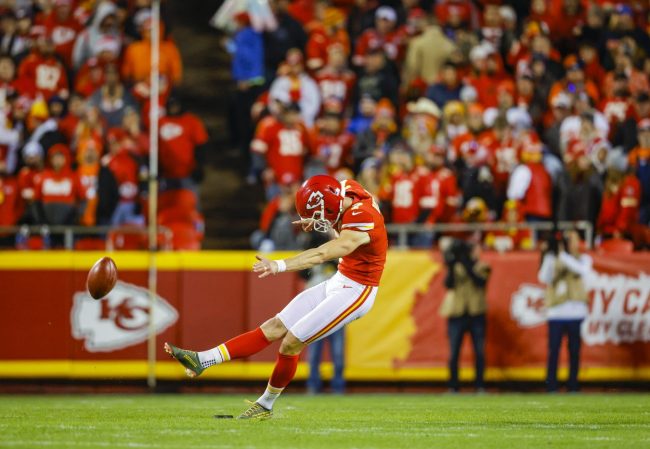 After some rain and damp conditions prior to Saturday’s game, the field at Denver’s Mile High Stadium was a little bit wet. Chiefs kicker Harrison Butker found that out the hard way.

The 26-year-old, five-year NFL veteran simply could not stay upright. He kept slipping, and because he did not get injured, it could not be funnier.

Butker was kicking field goals during warmups, went to plant his left foot and had it slide out from under him. As a result, Butker fell straight onto the ground.

It was Charlie Brown-esque, like when Lucy pulled the ball away and he flopped onto his back. Take a look:

Because of the pregame struggles, of which there were multiple according to Kirk Herbstreit, Butker changed his cleats with hopes of finding more footing.

Early in the first half, after the Chiefs found the end zone, Butker lined up to kick it deep. He went to take his six-step approach and boot the ball away, but it happened again.

On Butker’s fifth step, he appeared to start losing his footing. As he leaped out for the sixth and final step, his left foot slipped and Butker went down once again. He managed to make contact with the football, but it did not go far at all and Butker himself ended up sliding a solid three yards before hitting the ground and coming to a stop.

Again, because he was okay, it’s hilarious. Here is the in-game slip: